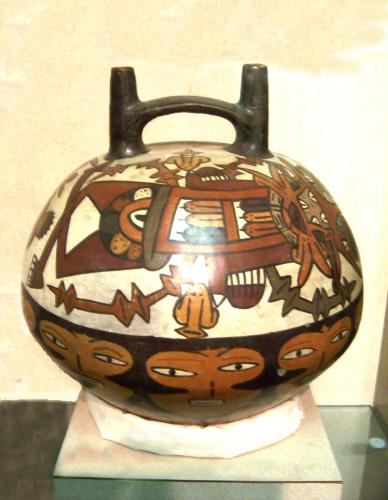 This collection of pre-Columbian Nasca pottery was assembled by Chancellor and Mrs. Harvie Branscomb. It is displayed in Garland Hall in recognition of his deep interest in Latin American culture and scholarship and Vanderbilt University's commitment to excellence in this field of study. The exhibit is made possible by a loan from his three sons, Harvie Branscomb Jr., Ben V. Branscomb, and Lewis M. Branscomb.

Nasca culture thrived on the south coast of present-day Peru for several hundred years, from 200 BC to AD 600. This is a harsh desert region where rivers often run dry, and life requires intimate knowledge of underground water sources and of hardy plants and animals native to the region. The Nasca developed complex strategies, pragmatic and religious, to understand and thrive in the world around them. We can only glimpse the content and meaning of Nasca myth and ritual in archaeological ruins and on artistic media such as decorated pottery. Intimate ties and concerns with the environment are reflected in highly developed artistic expressions. Perhaps best known for creating breathtaking lines and geoglyphs, the Nasca also developed some of the most elaborate ceramic techniques in the pre-Columbian Americas. Their slip-painted vessels displayed up to thirteen colors, and were fired in such a manner that designs would be permanent. Iconographic style changed over time, beginning with relatively naturalistic images during the Early Nasca, and ending with abstract, often highly complex images in Late Nasca.

Vessels include jars with bridged spouts, which served as bottles, and a variety of bowls and cups for ceremonial drinking and feasting. Nasca pottery depicts images ranging from mythical themes such as the Killer Whale, to human figures like the standing warrior, to naturalistic images that include hummingbirds, mice, spiders, and cactus. Vessels depict figures inhabiting the natural, supernatural, and social worlds, all of which were ultimately inter-related in Nasca culture. Unlike many pre-Columbian societies, elegant vessels like those in this collection were not restricted to high-status priests or leaders. Rather they were available to nearly everyone.

The Thurston collection includes pottery local to Tennessee and the Nashville region.