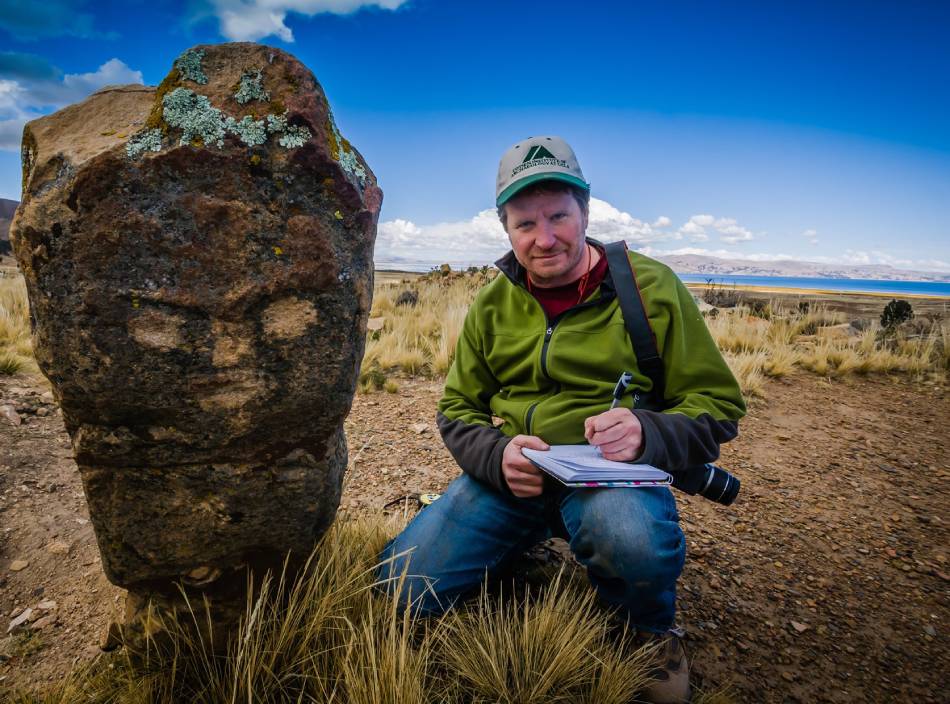 A brilliant archaeologist, professor, colleague, and friend whose life enriched the academic world and the life of each of us and our communities immeasurably

John Janusek, Associate Professor of Anthropology, died unexpectedly on October 22, 2019. We grieve the loss of this brilliant archaeologist, professor, colleague, and friend whose life enriched the academic world and the life of each of us and our communities immeasurably.

Professor Janusek was a broad, deep, holistic, and creative scholar of the pre-Hispanic Andes, urbanism, political ecology, iconography, ritual, materiality, and the history of beer and brewing. His large-scale, long-term research projects at the sites of Khonkho Wankane and Iruhito in the southern Lake Titicaca Basin of Bolivia have profoundly influenced a generation of Andeanist archaeologists. Among his many ongoing research initiatives is a trans-disciplinary project in collaboration with Andy Roddick (McMaster University), Carlos Lémuz (Sociedad de Arqueología de La Paz), and Victor Plaza (Sociedad de Arqueología de La Paz) in the eastern Lake Titicaca basin and Andean valleys. He was also engaged in a multiyear, interregional study of monoliths and stone sourcing at Tiwanaku and in the Middle Horizon, with Ryan Williams (Field Museum) and Anna Guengerich.

Professor Janusek was a prolific scholar who published four books: Identity and Power in the Ancient Andes (Routledge, 2004) Ancient Tiwanaku (Cambridge, 2008), Khonkho Wankane: Archaeological Investigations in Jesus de Machaca, Bolivia (University of California, Berkeley, 2018), and, as co-editor with Steve Kosiba and Tom Cummins, the forthcoming Sacred Matter: Animacy and Authority in the Americas (Dumbarton Oaks Press, 2019). Globally, he was renowned as an innovative and insightful theoretician, especially in the areas of urbanism, space and place, and landscape approaches in anthropological archaeology. His writings include many influential articles on ancient Andean history, social relations, landscapes, religion, and material culture. 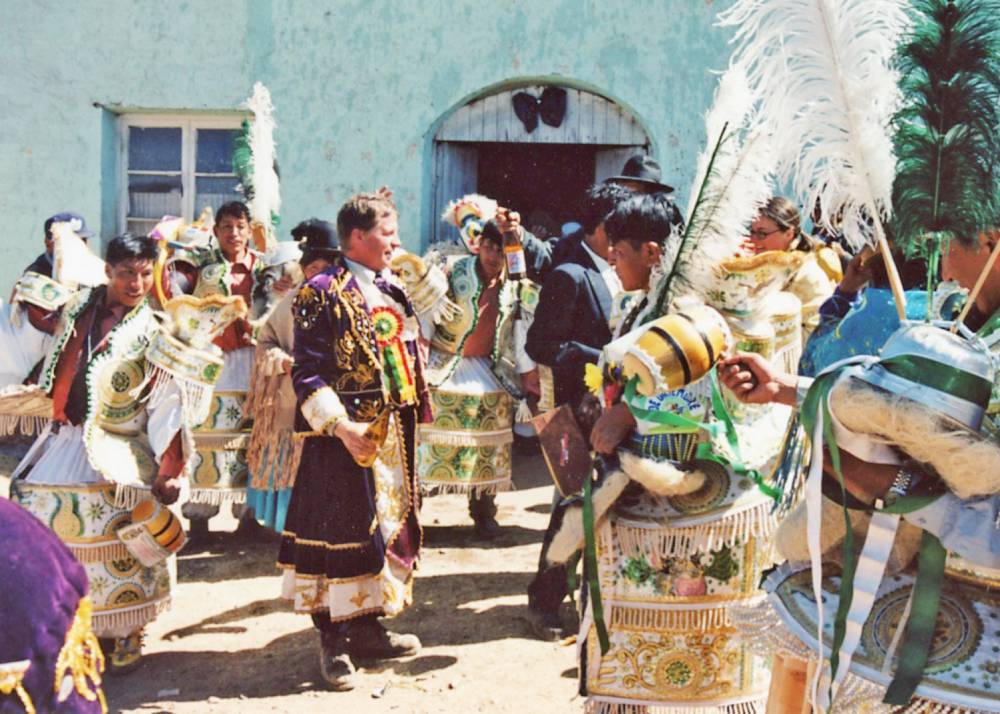 He was deeply committed to the people of the host communities where he did his research and became connected with them through ties of compadrazgo and other forms of ritual kinship. A devoted participant in Andean community life and celebrations, in 2007, he served as the preste sponsor of the Entrada Folklorica a Devoción al Apóstol Santiago (festival of Saint James procession) in the community of Qhunqhu Liquiliqui. 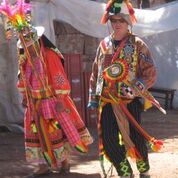 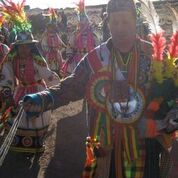 Professor Janusek was a perennial favorite instructor among Vanderbilt students. His spirit, passion, and love for archaeology and South American studies live on in his students and in the colleagues who had the privilege of working with him in the classroom, field, and laboratory. He was a true intellectual, driven by his roving curiosity, deep scholarly engagement, and commitment to the highest ideals of humanistic and scientific inquiry.

Raised in a musical family in the Chicago area–his father was a high school band instructor–Professor Janusek was an inordinately talented musician who could play everything from brass instruments to guitar and bass. At any given time he was an active player in at least one band during his years in Nashville. One of his entrées into archaeology was through beer can collecting, a hobby that began early in life when he found old cans in vacant lots near his home. Can collecting became a lifelong passion, and he is a nationally-renowned expert on the history of beer and beer cans in the collectors community.
We extend our deepest sympathy and condolences to Professor Janusek’s wife, Anna Guengerich, Research Assistant Professor of Anthropology, and to his mother and other family members. Further announcements of memorial gatherings and other initiatives in his honor will be forthcoming.

John about Eclipses and prehispanic times 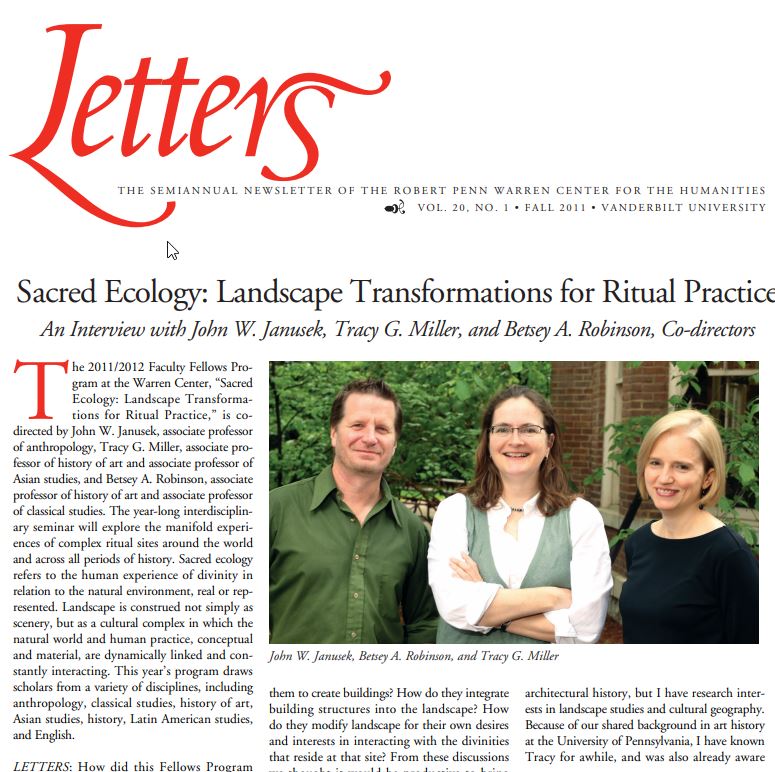 The year-long interdisciplinary seminar will explore the manifold experiences of complex ritual sites around the world and across all periods of history. Sacred ecology refers to the human experience of divinity in relation to the natural environment, real or represented. Landscape is construed not simply as scenery, but as a cultural complex in which the natural world and human practice, conceptual and material, are dynamically linked and constantly interacting. This year’s program draws scholars from a variety of disciplines, including anthropology, classical studies, history of art, Asian studies, history, Latin American studies, and English.

Our common interest in storytelling drew us together for a year of conversation. New questions emerged: How do stories rehydrate our memories? What are the ethical dimensions of telling someone else’s story? How do you find the story under the story? Why do stories matter? As we told each other about the origins of our teaching and research passions, we noticed that our exchanges grew more personal —family reminiscences, long-held memories, cherished objects, life-changing moments, unresolved uncertainties about perception, faith, and work inflected our conversations. Different disciplines can seem like separate planets within a university, all speaking different languages. Bringing together 10 people from those worlds forced us to translate and illustrate the stories central to our research so that they speak across these boundaries. John's contribution: Suñawa Awakens 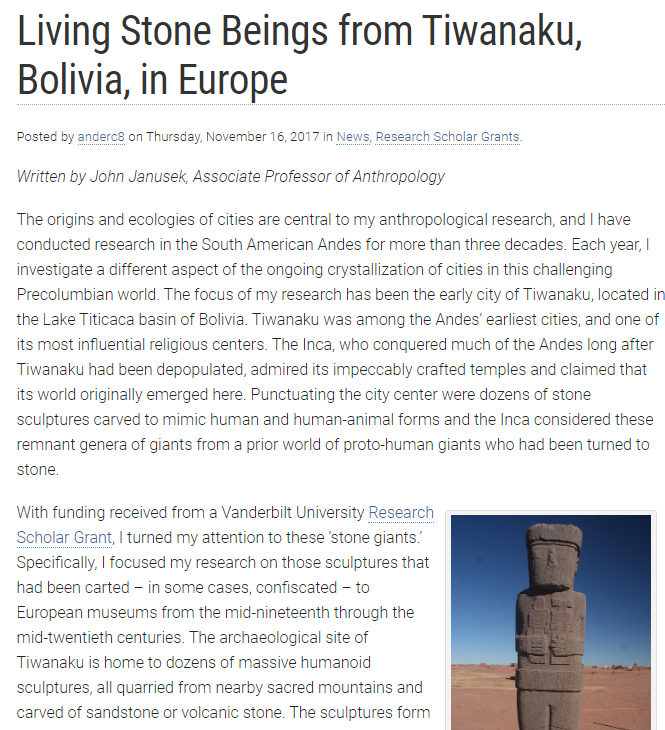 The origins and ecologies of cities are central to my anthropological research, and I have conducted research in the South American Andes for more than three decades. Each year, I investigate a different aspect of the ongoing crystallization of cities in this challenging Precolumbian world. The focus of my research has been the early city of Tiwanaku, located in the Lake Titicaca basin of Bolivia. Tiwanaku was among the Andes’ earliest cities, and one of its most influential religious centers. The Inca, who conquered much of the Andes long after Tiwanaku had been depopulated, admired its impeccably crafted temples and claimed that its world originally emerged here. Punctuating the city center were dozens of stone sculptures carved to mimic human and human-animal forms and the Inca considered these remnant genera of giants from a prior world of proto-human giants who had been turned to stone.