An ancient house, a random collection of people, and a surprise weather

I pushed myself up onto my forearms, then into a seated position, checking over each shoulder to see if this put me on a collision course with one of the many swiftly moving figures in the space behind me. The light filtering in from the sides of the tarp was dim, and I switched off my headlamp to avoid blinding anyone. This makeshift roof covered a tiny, rock-walled building where 20 or so people huddled to avoid the rain. The hillside, though now shrouded in mist, was scattered with dozens of similar crumbling rock structures, once home to subjects of the Inca Empire. The house we were excavating was one of the smallest in the sprawling complex, about two meters by four meters, but our team was making the best of the cramped space and the misting rain that kept us confined within it. 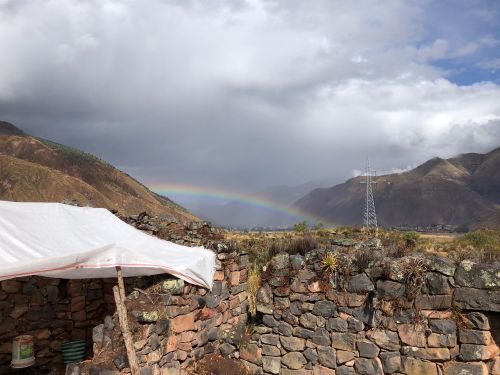 The showers had begun on Friday and had taken everyone by surprise. July was the dry season in the arid mountains of Cusco, Peru, and extended rain was a somewhat rare problem for excavations. Still, we strung up a tarp and kept going, anticipating only a few hours until work halted for the weekend. That was when we hit burials. Concealed beneath the floor without any sort of marker or headstone, there had been little indication of anything notable at all in the room until one of the workers called up to me. I was perched atop one of the walls, sketching the unit below during a brief pause in the rain showers, and was certain this was a joke. I had only seen rocks and fragments of pottery come out of the room so far, and surely the biggest discovery of the season wouldn't come at the most inconvenient time possible, would it?

On Sunday, covered in dirt and bundled up in rain gear, I began to sense the irony. I had spent the past two and a half days of lying on my stomach, head, and arms in an earthen pit, carefully brushing dirt away from delicate fragments of bone and trying to avoid getting in the way of my busy team members. We couldn't leave the burials out in the rain over the weekend for fear of water damage, or looters getting wind of a tomb, so the project had become a triage operation. We worked from with our headlamps from early morning until dark, and team members from the local town guarded the site at night. In the long, chilly days, we shared coffee breaks and jokes in a mix of Spanish, English, and Quechua, warming our hands on the thermos before going back to work. Our team came from a smattering of Peruvian villages, the city of Cusco, and several American universities. Few of us had known each other before this project started, and before this long weekend of work, the unit had mostly been quiet. Now the misty air was full of chatter, and the spirit of camaraderie made the tiny structure surprisingly cozy and pleasant. This was one of those serendipitous occurrences that are impossible to contrive or replicate: An ancient house, a random collection of people, and a surprise weather event all came together in that weekend to create an unforgettable experience.