Why Get an M.A. in Economics at Vanderbilt?

Vanderbilt’s M.A. in Economics, also known as the Graduate Program in Economic Development (GPED), attracts students from all over the world. Our close community of students supports one another and learns together, with full access to the advantages offered through attendance at a world-class research university. Our program’s unique features include: 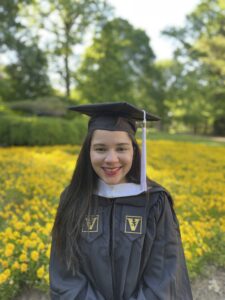 Prior to her graduation from the GPED, Fulbright scholar Yelidá María Blanco García (’21, Dominican Republic) participated in the World Bank’s noted Doing Business project as a spring intern within the Trading Across Borders team. As an intern, she had the opportunity to contribute to the 2021 and 2022 Doing Business reports, assisting with the preparation of the publication of the DB 2021 report, supporting the generation and distribution of the upcoming DB 2022 surveys, uploading, checking, and analyzing data of the Trading Across Borders indicators, and providing general support to the project.

“Studying economic development and working on one of the leading global initiatives carried out by the World Bank helped me achieve my academic goals in the GPED,” Yelidá said of the experience. “It was an excellent opportunity to improve my expertise in solving development issues, especially those that affect my country and the Latin American and Caribbean region. Working in an international labor environment endowed me with essential tools. I had the opportunity to develop further skills that grew my real-world experience in development economics, refining my analytical abilities in understanding the main challenges facing developing countries.” Congratulations, Yelidá!

In the summer of 1954, Vanderbilt University established a summer institute on economic development to offer international students additional training in the subject. Since then, the institute has grown into a full-fledged master’s degree program. Nearly 2,000 students from 137 countries have participated in the program and have become part of the worldwide GPED family. Many have gone on to distinguished careers in public service, international development organizations such as the World Bank, the private sector, and academia. We pride ourselves on continuing to welcome individuals from a wide variety of backgrounds to study in a supportive, collaborative and intimate environment.

In the summer of 1954, Vanderbilt University established a summer institute on economic development to offer international students additional training in the subject.

The U.S. Government agency that funded the institute selected Vanderbilt because of its strong reputation and its location in the South--to help demonstrate that the United States still had problems of economic development not dissimilar to those found in other countries across the globe. Field trips to nearby "developing regions" in the South highlighted the commonality of such problems in the United States.

After three summers and 200 participants, Vanderbilt was asked by the U.S. Government to inaugurate a comprehensive, year-round program designed to meet the training needs of officials in developing nations involved in setting development policy. In response to this request, the Graduate Program in Economic Development (GPED) was formally established in the fall of 1956.

Since then, nearly 2000 students from 137 countries have participated in the program and have become part of the worldwide GPED family. Many have gone on to distinguished careers in public service in their home countries, as finance ministers, ambassadors, heads of central banks and other important posts. Many have taken positions in international development organizations, such as the World Bank, the International Monetary Fund, the Asian Development Bank, the Inter-American Development Bank, the African Development Bank, and the United Nations. Others have pursued doctoral studies at Vanderbilt and other universities. In recent years, GPED graduates have also pursued careers in the private sector, and joined or started companies in the non-profit or for-profit sector of their economies.

The first Director of the Program was William H. Nicholls. He was followed by Rendigs Fels, Reynold E. Carlson, Anthony M. Tang, James S. Worley (who was director for more than a quarter century), Samuel Morley, Andrea Maneschi, Kathryn Anderson, James E. Foster, Suhas Ketkar and Kamal Saggi. Many other distinguished faculty have been associated with the Program over the years. Currently faculty members in the Department of Economics teach courses taken by GPED students, and students often take courses offered in the graduate program in public health, the Owen Graduate School of Management, the Engineering School, and the Peabody School of Education.

The program has benefited over the years from the generous support of the United States Agency for International Development, the Ford Foundation, the United States Department of State: Fulbright, and the Rockefeller Foundation, as well as from numerous agencies sponsoring students across the globe.

Today, the program is comprised of a thriving, tight-knit and diverse community of students. We pride ourselves on continuing to welcome individuals from a wide variety of backgrounds to study in a supportive, collaborative and intimate environment.