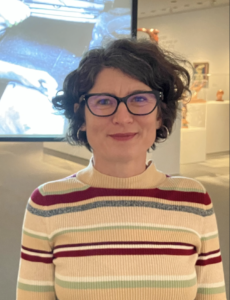 These interests are at the center of my third book Inhospitable World: Cinema in the Time of the Anthropocene (2018, Oxford University Press).  Chapters move from Buster Keaton’s weather designs to the Nevada atomic testing range, and from China’s Three Gorges Dam to the icy shores of Antarctica.  The book explores the relationship of media theory and aesthetics to the production of artificial worlds, weather, and climates in which hospitality and survival in the world are at stake. Film Quarterly  published an interview with me about this book (which has since been translated into Chinese), and extended reviews appear in  L.A. Review of Books and the  Hong Kong Review of Books.  Parts of the manuscript have been translated into Greek and Spanish. Inhospitable World has been named a Choice “Outstanding Title” by the American Library Association, won Honorable Mention for the 2019 ASLE Ecocritical Book Award, was shortlisted for the 2019 Best Moving Image Award, Kraszna-Krauz Foundation, and was recognized at Vanderbilt in 2020 with the Chancellor’s Award for Research. A recent essay in Representations , “Do I Know the Anthropocene When I See It?,” extends some of this research to contemporary documentary cinema and the political theory of Hannah Arendt.  This essay is open access and available to download here.

A second line of inquiry focuses on sincerity, opacity, and the media of appearance. A few recent essays venture into this topic. “Must We Mean What We Film?: Stanley Cavell’s Candid Camera,” is my contribution to a special double issue of Discourse I co-edited with Daniel Morgan entitled “Cinema, Modernism and the Perplexing Methods of Stanley Cavell” which appeared in November of 2020.  More recently, I explore the unlikely affinity between Hannah Arendt’s account of thinking and Cavell’s exploration of thought on film published in Critical Inquiry (Winter 2022).  Finally, an article, published in Screen, takes up the question of Hollywood’s white privacy in the writings of Cavell and James Baldwin.

I co-edit the Contemporary Film Directors series for University of Illinois Press, serve on the editorial boards of the Journal of Environmental Media and Film-Philosophy, coordinate the Film Theory and Visual Culture Seminar at Vanderbilt’s Robert Penn Warren Center for the Humanities, and have served on the Board of Directors for Nashville’s Belcourt Theatre from 2012-2018. From 2011- 2022, I was first director and then chair of the department of Cinema & Media Arts at Vanderbilt. In the Spring and Summer of 2021, I was a Fellow at Cinepoetics: Center for Advanced Film Studies at the Free University, Berlin.