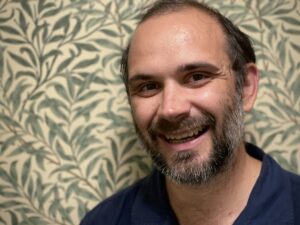 Assistant Professor, Cinema & Media Arts
(he / him / his)
Buttrick 003A
carmine.grimaldi@vanderbilt.edu
Website

I am a filmmaker and a historian of media, technology, and science. In both my creative and academic work, I’m particularly interested in the way that aesthetic experience inflects everyday life.

My films often inhabit the unstable boundary between fiction and non-fiction, and I usually develop them through creative collaboration with the subjects. Over the years, I have made films about a disgruntled foreclosure inspector, a dwindling church in the Southwest, a traveling carnival based in rural Kentucky, and the making of a melodrama about the Turkish-Kurdish conflict. My films have screened at venues such as True/False, Visions du Reel, The Museum of the Moving Image, Maryland FF, Sheffield Doc/Fest, RIDM, Chicago International FF, Camden, and Dokufest, where I received the prize for best short film. In 2017, I was named one of the 25 New Faces of Independent Film by Filmmaker Magazine, and have been a fellow at the Sensory Ethnography Lab, Harvard’s Film Study Center and Department of the History of Science, and the University of Wisconsin – Madison’s Center for the Humanities.

In addition to my filmmaking, I am currently working on a book project that explores the early history of videotape. My manuscript focuses on the era before video became a mainstay in the world of art and documentary, when various researchers believed it was a radical social technology that could transform the structure of institutions such as classrooms and psychiatric wards. My article on the subject, “Televising Psyche: Feedback, Style, and the Seductiveness of Video,” was published in Representations; my work has also appeared in the LA Review of Books, The Intercept, The Atlantic, MUBI Notebook, and Filmmaker Magazine.