Vereen Bell received his B.A. from Davidson College and his Ph.D. from Duke University in 1959. He has taught at Vanderbilt for over forty years, where he has received several teaching awards, including the Madison Sarratt Prize for excellence in undergraduate teaching and the Outstanding Graduate Teaching Award. He teaches a range of graduate and undergraduate courses on the modern British novel; the modern American novel; Modern poetry; contemporary British and American poetry; Yeats and Irish history; poetry and interpretation; and literary theory.

His books include Robert Lowell: Nihilist as Hero (1983), The Achievement of Cormac McCarthy (1988), and On Modern Poetry: Essays Presented to Donald Davie (1988). He has published articles on Charles Dickens, Robert Frost, W.B. Yeats, and the poetry of T.S. Eliot in journals such as Nineteenth-Centrue Fiction, The Southern Literary Journal, and Southern Review. He has also lectured at the MLA, the Conference on Narrative Theory, and the Yeats Summer School in Sligo, Ireland.

On Modern Poetry: Essays Presented to Donald Davie (Vanderbilt UP, 1988)

The Achievement of Cormac McCarthy (Louisiana State UP, 1988) 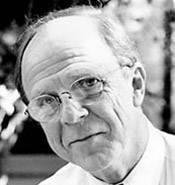