Stephanie A. Graves (she / her) is a scholar of rhetoric whose research primarily centers on rhetorical perspectives in film, television, and media with a particular interest in horror and iterations of the Gothic. Much of her work considers sites of intersectional identity, especially through the lenses of queer theory and queer rhetorics. Her background in theatrical and entertainment lighting design informs her analyses of visual media and culture, and she has published critical work on media such as Get Out, Hannibal, Supernatural, Justified, and more. Her current research focuses on queer and transgressive rhetorics in contemporary horror television.

Stephanie is actively involved with several media studies organizations; she is the chair for the Southern Gothic area for the Popular Culture / American Culture Association of the South, as well as the president of the Association for the Study of Buffy+. She also serves on the Editorial Advisory Board for Bloomsbury Press’s “B-TV: Television Under the Critical Radar” book series. She has given numerous talks at both US and UK conferences, including the Popular Culture Association, Fear 2000, SAMLA, LIT-TV at Edinburgh Napier University, and Slayage. Her public scholarship includes her recent invited lecture on camp and queer sensibilities for The Black Museum in Toronto as well as film introductions, podcast appearances, guest blogs, and other mediums and projects that bridge the divide between academic and public spaces.

"'There is no singing in Supernatural!': The Meta as Narrative Device in Supernatural." Supernatural out of the Box: Essays on the Metatextuality of the Series, edited by Lisa Macklem and Dominic Grace, McFarland Press, 2020, pp. 42-54.

“Inscription and Subversion: The Cabin in the Woods and the Postmodern Horror Tradition.” Joss Whedon vs. Horror: Fangs, Fans and Genre in Buffy and Beyond, edited by Kristopher Woofter and Lorna Jowett, I.B. Tauris, 2019, 123-40. 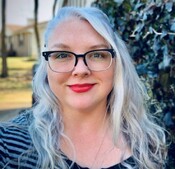