Sam B. Girgus is professor of English at Vanderbilt University.  His most recent work includes Clint Eastwood’s America (Polity Press2013/2014) as well as The Companion to Woody Allen, co-edited with Peter Bailey (Blackwell, March 2013). In addition, he has written the refereed essay on Woody Allen for the Oxford Bibliographies in Cinema and Media Studies (March 2013).  He also is the author of Levinas and the Cinema of Redemption: Time, Ethics, and the Feminine (2010); America on Film: Modernism, Documentary, and a Changing America ; Hollywood Renaissance: The Cinema of Democracy in the Era of Ford, Capra, and Kazan; The Films of Woody Allen (2nd ed.) which has been translated into several languages; Desire and the Political Unconscious in American Literature; The New Covenant: Jewish Writers and the American Idea; The Law of the Heart: Individualism and the Modern Self in American Literature. He also has edited several works, including The American Self: Myth, Ideology, and Popular Culture, and has written many essays and reviews, including articles on humor and Jewish writers and life.

A recipient of a Rockefeller Humanities Fellowship and other scholarly and teaching awards, he has lectured and taught extensively nationally and internationally. His interdisciplinary teaching and scholarly areas of interest include film, modernism, philosophy, and American literature, thought, and culture. He also taught a class that made In Loco Amicis: the New Vanderbilt Story, a 30-minute documentary about change at Vanderbilt University. The documentary was researched, written, filmed, and edited by students in a class listed as Documentary Vanderbilt. It was presented at the Nashville Film Festival on April 27, 2004.  During 2003-2004, he directed the development of a new Film Studies major at Vanderbilt following a similar position in developing the American Studies major at the university. He is a contributor to Screen Decades: The 1930’s and was a member of the Teaching Committee of the SCMS.  He was director for “Film at the Vanderbilt Commons” and directed a new project, “Filming Nashville: Student Documentaries on People, Life, and Community.” His essay-review on Woody Allen’s Vicky Cristina Barcelona appeared in Cineaste (Winter 2008). His review of Blue Jasmine appeared in Cineaste (Winter 2013): 53-55. He is currently working on a new study of violence, time, and the sacred in cinema.

Levinas and the Cinema of Redemption: Time, Ethics, and the Feminine (Columbia University Press, 2010)-- Film and Culture Series

The Hollywood Renaissance: The Cinema of Democracy in the Era of Ford, Capra, and Kazan (Cambridge UP, 1998)

Desire and the Political Unconscious in American Literature (Macmillan and St. Martin's Press, 1990)

The New Covenant: Jewish Writers and the American Idea (U of North Carolina Press, 1984)

Editor, The American Self: Myth, Ideology, and Popular Culture (U of New Mexico P, 1981)

The Law of the Heart: Individualism and the Modern Self in American Literature (U of Texas P, 1979)

A Companion to Woody Allen, co-editor with Peter Bailey (Blackwell, 2013) 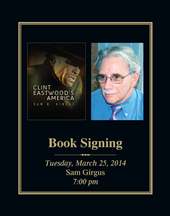