Pavneet Aulakh received his Ph.D. in English from the University of California, Santa Barbara and an M.A. in Creative Writing from Boston University, where he studied poetry. Before joining Vanderbilt University's English Department, he was the Literature Fellow at UCSB's College of Creative Studies, for whom he taught courses on Shakeseare, Chaucer, and the subject of curiosity in the literature and experimental philosophy of the Renaissance. In addition to his concentration on the literature of early modern England, his research and teaching interests include: the history and philosophy of science, particularly as it pertains to interconnections between the imiginative and proto-scientific literature of the seventeenth century; the history of the book; aesthetics and poetics; early modern and contemporary philosophy; and medieval literature.

Aulakh's book project, Beyond Words: The Senuous Turn in Jacobean England, draws on the history of science, early modern theorizations of the period's inherited rhetorical tradition, and the history of material texts to reconsider the relationship between seventeenth-century natural philosophy and imaginative literature. Instead of positioning these fields in an opposition relationship, it advances an appreciation for the senuous poetics and representational strategies shared by proto-scientific and imaginative literatures by focusing on Francis Bacon and a network of literary contemporaries whose careers and writings intersected George Herbert, John Donne, and Margaret Cavendish, this project illustrates not only the influence Bacon's project exerted on his literary peers, but also the vital role of poesis and the imagination, particularly as an image-maker, in the performance of the new science. 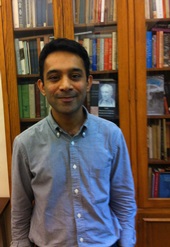