Houston A. Baker was born in Louisville Kentucky. He received his BA from Howard University, and his MA and Ph.D. from the University of California at Los Angeles. He has taught at Yale, University of Virginia, University of Pennsylvania, and Duke. He is currently Distinguished University Professor and Professor of English at Vanderbilt University.

His awards and honors include: Guggenheim and National Endowment for the Humanities Fellowships, resident fellowships at the Center for Advanced Study in the Behavioral Sciences and the National Humanities Center, and honorary degrees from a number of US colleges and universities. He has served as President of the Modern Language Association of America, and is the author of articles, books, and essays devoted to African American Literary Criticism and Theory. His book Betrayal: How Black Intellectuals Have Abandoned the Ideals of the Civil Rights Era received an American Book Award for 2009. He is co-editor with Professor Merinda Simmons of the collection of original essays titled The Trouble With Post-Blackness (Columbia University Press, 2015).  His book, Blues, Ideology, and Afro-American Literature, was released as a Japanese edition (Hosei University Press, 2015). 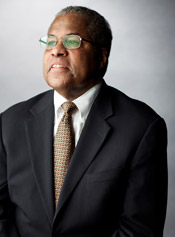 M.A. and Ph.D. University of California at Los Angeles