Gabriel A. Briggs is a principal senior lecturer in the Department of English at Vanderbilt University, where he teaches courses in nineteenth- and early twentieth-century American and African American literature and culture. He is an award-winning teacher whose recent acknowledgments include the Harriet S. Gilliam Award for Excellence in Teaching and the COVID-19 Innovative Teaching Award.

His book, The New Negro in the Old South (Rutgers University Press 2015), redefines our understanding of the idea of the New Negro by following its genealogy back to its historical and geographical origins in the post-Reconstruction nineteenth-century South, where it looks at the literary and cultural factors that influenced the development of a modern African-American, and ultimately, a New Negro identity. In this context, Briggs makes a compelling case that nineteenth-century, post-bellum Nashville, provided the locus of the economic, intellectual, social, and political concepts that shaped the strands of African-American cultural and intellectual identity that consolidated around the term, "The New Negro" in the early twentieth century. In his detailed analysis, Briggs significantly challenges the conventional wisdom that the post-Civil War nineteenth-century South was a region from which African Americans had to escape—either because of agricultural disasters such as soil depletion and the raging boll-weevil, or because of uncompromising social and economic segregation—in order to achieve a cultural and intellectual rebirth. He demonstrates that post-Reconstruction Nashville, therefore, rather than New York or Chicago, was the formative site in the emergence of a New Negro, whose identity stood in vivid contrast to the compliant, rural and under-educated African American who preceded it.

In addition to fresh critical perspectives on such figures as W. E. B. Du Bois and Sutton Griggs, The New Negro in the Old South reexamines forgotten strands of New Negro cultural history, including turn-of-the-century southern streetcar strikes and black college rebellions. These events place southern history and geography in a sharper, more prominent relationship to the historical and social geography of the late-nineteenth and early-twentieth-century by elucidating the intricate racial politics surrounding the role of African-American leadership in the formation of a modern African-American identity.

In addition to writing on the New Negro, his publications include work on Sutton Griggs and Annie Burton and have appeared in journals such as Southern Quarterly and Callaloo. 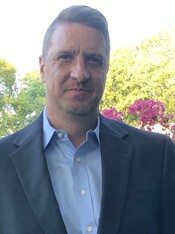