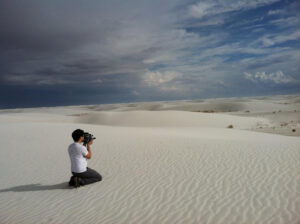 MFA – Film and Video Production, The University of Iowa, 2008

Jonathan Rattner is an award-winning filmmaker and artist who primarily produces experimental nonfiction films and videos. In his work he employs a mixture of documentary (found footage, interviews, historical research) and lyrical (soft-focus imagery, collage, jump cuts, non-diagetic sound design, long-duration wide shots) filmic elements. By doing so, he strives to create a cinematic space in which viewers are invited to interact with what they see on the screen and create meaning by reflecting on their own experiences, ideas, and truths.

He holds M.F.A’s in Film and Video Production and in Intermedia Art from the University of Iowa and a B.F.A. in Film and Television from Tisch School for the Arts, N.Y.U. From fall of 2005 to the summer of 2009 he acted as the creative director of Iowa City Senior Television, a twenty-year-old station consisting of crewmembers whose ages range from 65 to 89.