PHYS 1501 and 1502: The 1501/1502 sequence is a calculus-based introduction to physics taught within the context of life science applications. Students enroll separately in the accompanying laboratory classes (1601L/1602L).

PHYS 1601 and 1602: The 1601/1602 sequence is a calculus-based introduction to general physics and its applications intended for students in the natural sciences and engineering. Students enroll separately in the accompanying laboratory classes (1601L/1602L).

PHYS 1911 and 1912: The 1911/1912 sequence is an intensive, calculus-based introduction to general physics and its applications intended for students planning to major in physics. Students taking 1911 (Fall semester, only) should plan to take the first-semester lab (1912L) in the Spring semester. Students taking 1912 (Spring semester, only) should plan to take the second-semester lab (2255L) in the third semester (Fall). Physics majors will then take a third semester lab (2953L) in the fourth semester.

Regarding calculus and the 1911/1912 sequence: Students who studied calculus in high school but who did not receive AP credit for Calculus from Vanderbilt may still take 1911 with permission of the Director of Undergraduate Studies of Physics and Astronomy. Students in this situation could consult with the DUS to determine whether they have a strong enough mathematical background to take these courses. Note, however, that 1912 assumes students are taking multi-variable calculus (MATH 2300), so a student who begins in 1911 and in MATH 1300 probably should then take 1602 in the Spring, along with MATH 1301. This student can then continue in the third semester with PHYS 2255 and MATH 2300.

PHYS 1010/1020: PHYS 1010 is a one-semester, algebra-based introductory physics course designed for non-science majors. It is not adequate as preparation for any of the pre-health professions (medical, dental, physical therapy). Vanderbilt students seeking a full year of algebra-trigonometry-based physics as preparation for a career in one of the health professions will need to take that coursework in the summer at another university.

Required for the Major

PHYS-3660: Introduction to Particle Physics
Weak, strong, and electromagnetic forces as evidenced by the interactions of elementary particles. Classification of particles and experimental techniques. Corequisite: 2255 or 3651.

ASTR-2110: The Solar System
The sky, orbits, and gravity. Ancient astronomy. Seasons, the calendar, phases and motions of the moon, tides, and eclipses. Terrestrial planets, giant planets and their moons and rings, asteroids, comets, meteorites, and the sun. Habitable zones for planets and moons, extremophiles, and the possibility of life on other worlds.

ASTR-3000: Principles of Astrophysics
Tools and methods of astrophysics, including light and telescopes. Cosmology, the Big Bang, and the origin and evolution of matter. Galaxies, star formation, and the physics of stars, including nucleosynthesis and stellar death. Techniques for discovering and measuring properties of exoplanets. Prerequisite: either PHYS 1501, 1601, or 1911: and either MATH 1100, 1200, or 1300. 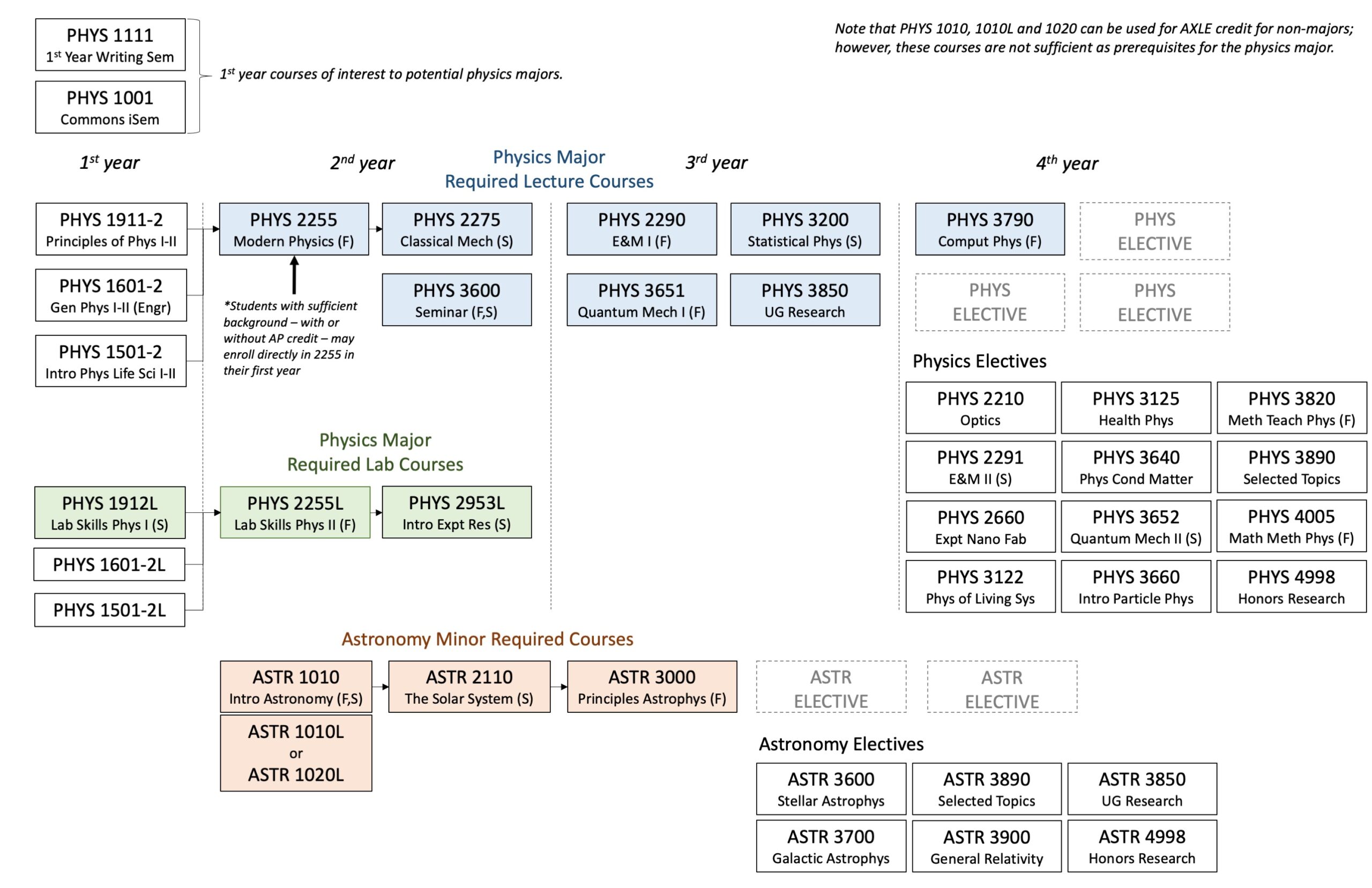