Immersion is… an opportunity for undergraduate students to pursue their passions and interests through experiential learning. The majority of physics students do research as an Immersion experience. Their research results are summarized in an honor thesis, which satisfies Immersion requirements.

The Immersion experience can also be greatly enhanced by a semester of international study. We strongly encourage physics majors who desire an international experience to study abroad, and about one-fourth of them do so. Though a study abroad experience is not required, we encourage physics majors to study abroad in English-speaking countries (England, Scotland, Ireland, New Zealand, Australia, South Africa), where they can take physics and astrophysics courses while abroad. Various study abroad programs are offered during the fall or spring semester. For general information, visit the Global Education Office. 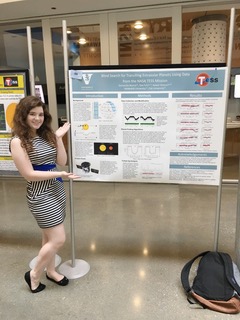 Bianco, the first Vanderbilt student to officially complete an Immersion project, was named co-author on a graduate-level scientific research paper. Working in Professor of Astronomy, Keivan Stassun’s lab, her Immersion project inspired her plans for the future, and she became interested in a career focused on the communication of science, specifically space science within an organization like NASA.

“I really love the idea of taking something that’s really complex with tons of scientific jargon and putting it into words that the general public can understand and be interested in,” she said.