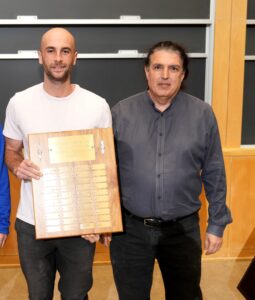 Samir Aldroubi was a Professor of Philosophy and Psychology and Dean at the University of Damascus. He later moved to Abu Dhabi and became the General Director of the Abu Dhabi Chamber of Commerce, United Arab Emirates. He died in 2007.

Amira Azhari is a retired Professor of Psychology. She currently lives in Damascus, Syria. She taught at the Department of Psychology and Education at the University of Damascus, Syria, and later worked at the Ministry of Education of the United Arab Emirates in Abu Dhabi, where she was the Director of Curriculum Development for Preschools.

The first Aldroubi-Azhari Prize was presented in May 2010 to Romain Tessera, who was a postdoc in the department from 2006 to 2009. Tessera is now a researcher at the CNRS (French National Center for Scientific Research) in Lyon, France. His research interests are in the areas of geometric group theory and analysis on metric spaces.

Candidates for the Aldroubi-Azhari Award are nominated by the faculty of the department, and the recipient is selected by a departmental committee. The chosen mathematician receives $1,000 and is invited to Vanderbilt to deliver a mathematics colloquium reflecting his or her research interests.