Professor Ifeoma Kiddoe Nwankwo is Associate Professor of English at Vanderbilt. She earned her Ph.D. from Duke University in 1999, with certificates in Latin American Studies and African American and Diaspora Studies. Her research centers on nineteenth and twentieth century U.S. African American and Caribbean literature and culture (including that from the portions of Central America that border the Caribbean Sea). In particular, Professor Nwankwo’s work has focused on encounters between these peoples in the areas of culture, identity, and ideology, with the goal of understanding recurrent paradigms for intercultural interaction and barriers to progressive cross-group engagements. For this work, Dr. Nwankwo has been awarded fellowships from the Ford Foundation, the DeWitt-Wallace Foundation, and the Woodrow Wilson National Fellowship Foundation.

Her book, Black Cosmopolitanism: Racial Consciousness, and Transnational Identity in the Nineteenth-Century Americas (University of Pennsylvania Press 2005), is a comparative study of people of African descent in Cuba, the U.S., and the British West Indies in the wake of the Haitian Revolution. In it, she reveals that fear fostered by the revolution determined and has continued to determine the ways African-descended peoples in this hemisphere relate to each other, as well as to other American populations. The implications of this analysis for attempts to understand relations between U.S. African Americans and recent immigrants to the U.S. as well as to Africans are significant. Professor Nwankwo has provided new insight into U.S. African American-Latino/Latin American-Caribbean relations through articles on a number of topics, including the portrayal of Latin America in the novels of U.S. African American writers Gayl Jones and Martin Delany, on the mechanics of memory in Panamanian West Indian writing, on the politics of intra-racial translation in Langston Hughes’ translations of Nicolas Guillen’s poetry, and on Zora Neale Hurston’s ethnographic engagement with the Caribbean. She has edited three volumes: African Routes, Caribbean Roots, Latino Lives (a special issue of the journal Latin American and Caribbean Ethnic Studies), Rhythms of the Afro-Atlantic World (a collection of essays co-edited with Mamadou Diouf), and Critical Approaches to Louise Bennett (a special issue of the Journal of West Indian Literature).

Her more recent undertakings both build on and depart from this earlier work by using ethnographic methodologies alongside literary critical and cultural studies approaches to explore Inter-American engagements in the realms of cultural memory, identity, and language as they appear in poetry, music lyrics, and oral histories. Nwankwo is the Founding Director of Voices from Our AmericaTM, an international project linking academic research, K-12 curriculum development, and community engagement. The project uses ethnographic and archival research to uncover new aspects of communities’ histories, then develops and runs workshops for teachers, youth, and community members in addition to creating digital archives and innovative educational materials and programs based on the new information uncovered. The project’s website can be accessed at: http://voicesamerica.library.vanderbilt.edu/home.php and the educators’ blog at: http://vfoa.edublogs.org/. Nwankwo brings this work into the classroom, enacting her belief that it is absolutely crucial that U.S. youth not only grasp the historical and contemporary realities of the many cultured worlds within and beyond the United States, but also are able to understand how their own existence and worldviews have been shaped by those realities. This mission drives her pedagogy, alongside her commitment to hands-on, eyes-on, and ears-on learning inside and outside of the classroom.

Her current book projects center on the identity- and memory-making methodologies employed by Caribbean diaspora communities in Latin America and the relevance of race for the theory and practice of the digital humanities. 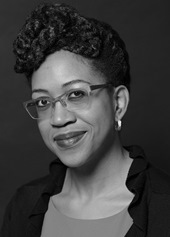