Allison Schachter specializes in modern Jewish literature and culture, with allied interests in modernism, transnationalism, diaspora, and gender studies. Her research focuses on how writers and artists responded to the historical transformations of the nineteenth and twentieth centuries, including the rise of nationalism, the explosion of revolutionary movements, and the radical transformations of gender norms. Trained as a comparativist, her research encompasses Hebrew, Yiddish, English, and French literature. She is the author of Diasporic Modernisms: Hebrew and Yiddish Literature in the Twentieth Century (Oxford University Press, 2012) and Women Writing Jewish Modernity, 1919-1939, 1919-1939 (Northwestern University Press, 2021). She is the co-translator, with Jordan Finkin of Fradl Shtok, From The Jewish Provinces, Selected Stories (Northwestern University Press, 2021).

Jewish Literature/World Literature: Between the Local and the Transnational"  Co-authored with Lital Levy, PMLA 130.1 (2015).

"Modernist Indexicality: The Language of Gender, Race, and Domesticity in Hebrew and Yiddish Modernism," MLQ 72.4 (2011).

"A Lily Among Bullfrogs: Dahlia Ravikovitch and the Field of Hebrew Poetry." Prooftexts. 28:3 (2009).

"The Shtetl and the City: The Origins of Modern Jewish Nostalgia in Shloyme reb khayims and Ba-yamim ha-hem." Jewish Social Studies. 12.3 (2006). 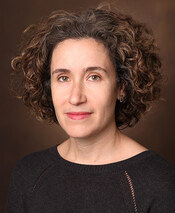