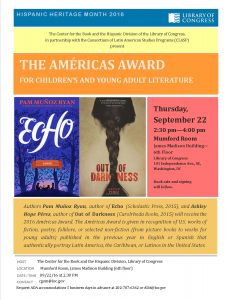 New York, New York – May 29, 2016 – Pam Muñoz Ryan, author of Echo, and Ashley Hope-Pérez, author of Out of Darkness, win the 2016 Américas Award for Children’s and Young Adult Literature. The award links the Americas by reaching beyond geographic borders and multicultural-international boundaries, focusing upon cultural heritages within the hemisphere.

Up to two annual book awards are given in recognition of U.S. published works that authentically and engagingly portray Latin America, the Caribbean, or Latinos in the United States. An additional two titles may be recognized as Honorable Mentions, along with a list of Commended Titles. Books are considered for their distinctive literary quality, cultural contextualization, integration of text and illustration, and potential for classroom use.

The announcement was made today by the Consortium of Latin American Studies Programs (CLASP) during the Latin American Studies Association (LASA) meeting held May 27-30, 2016, in New York, NY.  The award-winning authors will be recognized at a ceremony held September 22, 2016, during Hispanic Heritage Month, at the Library of Congress in Washington, D.C. A teacher workshop will follow the ceremony at Mulebone restaurant in Washington, D.C.

CLASP’s mission is to promote all facets of Latin American Studies throughout the world. Its broad range of activities include the encouragement of research activities, funding for professional workshops, advancement of citizen outreach activities, and development of teaching aids for the classroom. For complete annotations of all titles recognized by the Américas Award, as well as curricular resources for previous winning titles, visit www.claspprograms.org/americasaward.  Follow the Américas Award on Facebook at www.facebook.com/americasaward for current news and author highlights, and join the conversation using #AmericasAward16.

For reference, see the press release of this announcement.

Echo, published by Scholastic Press, presents the moving, interwoven stories of three young protagonists who experience the early 20th century’s horrors of war, cruelty, and discrimination. Using music and creativity as a common thread, Muñoz-Ryan deftly ties together what would be an otherwise disconnected set of experiences separated by decades and continents. The resulting novel demonstrates to students that humanity’s similarities outweigh its differences. As committee member Maria Sheldon write, “Muñoz Ryan’s message in Echo sings right off the pages and into students’ imaginations” as the novel invites young readers to experience not only the turmoil of the young character’s lives, but also music’s extraordinary powers to heal, inspire, and connect.

Out of Darkness (Carolrhoda Lab, 2015), written by Ashley Hope-Pérez, is a book that destroys the reader while at the same time creating a sense of hope, a way out of the darkness. Ashley Hope Pérez has written just such a book. This young adult historical novel Out of Darkness begins with a real event: the explosion of the New London School in East Texas in 1937. Using this tragedy as a centerpiece, a metaphor, and a catalyst, Pérez weaves the fictional stories of two families brought together by forbidden love. Wash Fuller is an educated African American boy successfully navigating the complicated racial divisions of his community. Naomi Smith is a Mexican American girl, terrorized by the sexual advances of her white stepfather, yet compelled to live with him to protect her young twin siblings. This is not a story with a fairy tale ending, but there are moments of great beauty and pure joy as Wash befriends the twins and gradually falls in love with their big sister – all while they are surrounded by the gentle beauty of the East Texas woods. Written for the oldest of teens, Out of Darkness is as violent and cruel as the racially divided world it portrays, yet it also manages to guide readers onto a path out of the unimaginable: speaking truth to lies and writing the stories of those who do not survive.

Growing Up Pedro: How the Martinez Brothers Made it from the Dominican Republic All the Way to the Major Leagues written and illustrated by Matt Tavares. Candlewick Press, 2015. ISBN: 978-0763668242

While there have been many Dominican baseball players in the major leagues, none have kindled the deep enthusiasm and allegiance in so many fans as pitcher Pedro Martinez. In his book, Growing Up Pedro: How the Martinez Brothers Made It from the Dominican Republic All the Way to the Major Leagues, Matt Tavares celebrates this larger-than-life baseball hero with meticulous paintings and simple words. Through realistic, almost cinematic paintings that reveal both the panoramic suspense and movement of the game, as well as the intensity as Martinezwinds-up to pitch, Tavares takes us into the world of the Martinez brothers as they make their way from a poor Dominican village into the world of the US Major Leagues. Without his brother Ramón, Tavares lead us to believe, there would be no Pedro. The relationship between the two brothers is the centerpiece of the book: whether throwing rocks at mangos as boys or pitching against each other in a historic game in 1996, the two brothers maintain their deep connection and give each other the strength they need to continue through injury and involuntary trades. Any true baseball fan will be thrilled at the page of Martinez’s stats in the back of the book, and aspiring pitchers will thrill at the visual interpretation of three of his classic pitches. From a small boy watching his big brother play in their village to the star pitcher that led the Red Sox to win the World Series in 2004, Tavares gives us a beautiful portrait of one of baseball’s most prized and beloved players. The book is also available in Spanish. (Grades 2-4)

Author and illustrator Duncan Tonatiuh’s latest work presents an extraordinary blend of biography, art, and politics focusing on the life of José Guadalupe Posada (1852-1915), or Don Lupe, as he was known at the time. Posada is most famous for his socially-conscious depictions of calaveras, the often comic skeletons that are well-associated with Mexico’s Day of the Dead holiday celebration. This non-fiction picture book will appeal to a wide range of readers, with its engaging hand-drawn, digitally collaged depictions of Don Lupe, first as a child with a natural talent in drawing, and then throughout his adult life as an artist mastering the craft of lithography. Throughout, we see as Done Lupe continuously pursues his artistic passion while offering social commentary about the world around him. The full-page spreads inspired by Don Lupe’s work actively probe the reader to consider deeper meaning behind his artwork, such as critiques about social class, quickly changing technology, and violence during the Mexican Revolution. This superb work is easily adapted to a variety of classroom settings spanning subject areas such as history, art, and cultural studies. Additionally, Tonatiuh includes a detailed author’s note, glossary of terms, and bibliography for readers interested in diving further into Posada’s work. (Grades 3-6)

Annotations for these titles available on the CLASP website.