NASHVILLE, Tenn.—A four-year longitudinal study of older LGBTQ+ people in the South is being conducted to better identify the sources of stress and resilience for this infrequently studied population. Led by Tara McKay, assistant professor of medicine, health, and society, and her team, the Vanderbilt University Social Networks, Aging, and Policy Study (VUSNAPS) is providing the first data of its kind, which policy makers are already using to better reach the community and help them cope during the COVID-19 pandemic. 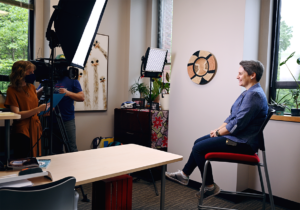 McKay and VUSNAPS were recently featured in an Aging Matters episode on Nashville Public Television. Watch the episode for more on the unique social, economic, and health challenges LGBTQIA+ older adults face in Nashville and beyond.

“At the time, the mayor’s office was looking to make sure that lots of different groups weren’t excluded from the (COVID-19) response,” McKay said.

In addition to COVID impacts, wave one explored healthcare disparities within the community. A soon-to-be-published paper details how access to an LGBTQ+-affirming healthcare provider leads to improved management of mental health, greater participation in preventative health screenings, and lower levels of cognitive impairment among older LGBTQ+ adults.

“Having a healthcare provider that you view as LGBT-affirming actually shapes your healthcare experience,” McKay said. “We know that this age group is hesitant to go to see a doctor. They have either personally experienced or have heard about other people’s experiences of discrimination from providers. This, on average, keeps them home longer with an illness before they seek help—making the situation worse. We were really surprised at the health improvements achieved just by having a provider that you were out to and who was affirming.”

The initial three-wave VUSNAPS study, which is funded by the National Institutes of Health, has spawned a separate BioAge study which will analyze the connection between biological aging and the aging experiences reported through the surveys.

“We’re looking not only at how your self-reported health is changing or linked to other factors, but also how your DNA and systems are actually aging in response to stress or other life events,” McKay said.

The information gathered from VUSNAPS will ultimately be publicly available via a database for other researchers to use in their own work. Already, researchers from the University of Colorado Denver, UCLA, and Israel have expressed interest in having access to the data for study.

“There’s a lot of interest and we have a ton of momentum,” McKay said. “There isn’t anything else like this out there.”

Numerous factors make VUSNAPS exceptional and desired. Most current LGBTQ+ community research that exists only surveys people once, whereas McKay’s work revisits the same population three times over the span of four years, providing a better snapshot of how people’s situations evolve over time. Also, the majority of existing LGBTQ+ research focuses on younger people, which doesn’t represent the whole community.

“There’s almost no information on aging in this community,” McKay said. “This knowledge is important because we know there are actually a lot of health disparities at an earlier age, but we need to see what happens to those disparities over time, in multiple dimensions. Do they compound, or do people find a way to thrive anyway? How are people responding to some of these issues in their lives? How do they cope with them and build a life? That’s what we’re looking at here.”

Additionally, VUSNAPS gives a unique look at the social networks of LGBTQ+ people, which can be very different from the heterosexual community. Because they tend to have fewer family members, but more friends, in their network, there are implications as they get older and need support.

McKay said her group plans to use the data gathered for future study on LGBTQ+ social networks and other topics, including the effects of discrimination on sleep quality, and political engagement and activism later in life.

The project has also provided an opportunity for many students to participate and engage in topics important to them.

“We have a lot of students involved in this, and folks have connected with it,” McKay said. “It’s clearly important to students who share some of these identities, but also to students who really just want to work on something that matters and has a social justice component. It can be something they care about.”