Zachary B. Feldman is a scholar and curator of media art and film. He is a final year joint-PhD candidate in Comparative Media Analysis and Practice and German, Russian and East European Studies at Vanderbilt University. In addition to his graduate studies, Zach has worked at institutions such as the Zentrum für Kunst und Medien (Center for Art und Media, ZKM) in Karlsruhe, Germany and the National Gallery of Art in Washington, D.C. His research interests include production under late-stage capitalism, archaeologies of past and future, and documentary representations of reality. 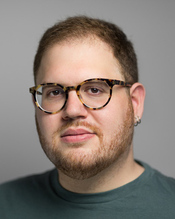