My research focuses on 20th and 21st century German literature, with particular interest in poetry and poetics, memory studies, German/Hebrew literature, and critical theory. I am currently working on my first book project based on my dissertation “Ethical Tendencies: Poetic Attention in the Wake of the Holocaust.” The project examines how poetic writing after the Nazi genocide orients readers toward responsiveness to the past and responsibility in the present through formal means. Bringing Paul Celan in dialogue with poets from Dan Pagis to May Ayim I show how strategies such as fragmentation, semantic indeterminacy, or rhythm can generate patience, hesitation, susceptibility, and wakefulness—modes of “ethical attention,” I argue, that counter the violent logic of “concentration” that defined the concentration camps. A new research project continues my interest in the capacities of aesthetic form to mobilize relationality by tracing a poetics of (un)belonging in post-1945 German literature and film. Another smaller project is dedicated to the unpublished German-language poetry of Annette Eick.

I received my PhD from the Department of Comparative Literature at UC Berkeley with a Designated Emphasis in Jewish Studies and in Critical Theory in 2020 and hold a B.A. and M.A. in Comparative Literature from LMU Munich. I have taught undergraduate seminars on topics such as German Pop- and Sub-Cultures, "Arts of Memory” and "On Borders."

“A Technique of Closeness, An Art of Straying: Reading with Walter Benjamin,” in New Literary History, 50.2, Spring 2019.

“Of Poems that Wake Us: Entangled Memories after the Holocaust” 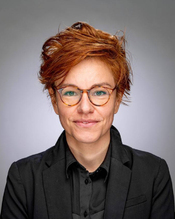