Roger E. Moore is Senior Associate Dean, Director of Undergraduate Education, and Principal Senior Lecturer in English at Vanderbilt, where he has taught since 1995. He is responsible for all aspects of the undergraduate curriculum, including development of academic policies, approval of new majors and minors, and support for advising.  A specialist in early-modern English literature and religion, Dean Moore is the author of scholarly articles on Christopher Marlowe, Sir Philip Sidney, and Geoffrey Chaucer, among others, in SEL, Religion and Literature and Studies in Philology. His most recent work explores nostalgia for monasteries and the monastic life in England from the sixteenth to the eighteenth centuries, work that has inspired three articles on Jane Austen and his book, Jane Austen and the Reformation: Remembering the Sacred Landscape (Ashgate/Routledge 2016). The recipient of the Harriet S. Gilliam Award for Excellence in Teaching (2003) and the Ernest A. Jones Faculty Adviser Award (2008), he teaches courses in seventeenth- and eighteenth-century literature and the English Reformation as well as introductory writing courses and surveys of British literature.

Dean Moore has been appointed Traveling Lecturer by the Jane Austen Society of North America for the 2021-22 academic year.  He serves on the Board of Directors of the Nashville Ballet and was Senior Warden of the Vestry at Christ Church Cathedral (Episcopal) in 2017-18.

"The Hidden History of 'Northanger Abbey': Jane Austen and the Dissolution of the Monasteries" Religion and Literature 43.1 (Spring 2011): 55-80.

"The Spirit and the Letter: Marlowe's Tamburlaine and Elizabethan Religious Radicalism." Studies in Philology 99 (2002): 123-151. 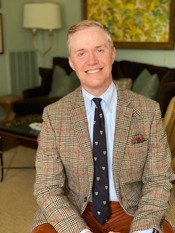