Professor of English and American Studies

Teresa A. Goddu is Professor of English and American Studies at Vanderbilt University and serves as Faculty Head of E. Bronson Ingram College. She is a specialist in nineteenth-century American literature and culture. Her research and teaching focus on slavery and antislavery, race and American culture, the history of the book, genre studies, as well as print, material and visual culture. She is the author of Gothic America: Narrative, History, and Nation (Columbia University Press, 1997) and Selling Antislavery: Abolition and Mass Media in Antebellum America (University of Pennsylvania Press, 2020). Her work has appeared in American Literary History, Book History, MELUS, Common-Place, South Atlantic Quarterly, Studies in American Fiction, and other venues. She is the recipient of two grants from the National Endowment for the Humanities and a Senior Specialist Fulbright award.

Her new research focuses on the environmental humanities. She is writing a book-length study of contemporary climate fiction and she curates a climate fiction collection at the Vanderbilt library. As Director of the Program in American Studies, she designed and directed “The Sustainability Project,” a three-year interdisciplinary initiative to embolden Vanderbilt’s environmental efforts, which resulted in a minor in Environmental and Sustainability Studies. She was awarded The Chancellor’s Cup and named Alexander Heard Distinguished Service Professor for this work. She is the recipient of the Jeffrey Nordhaus Award for Excellence in Undergraduate Teaching in the Humanities. 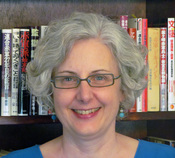