Joshua Roling is a fourth-year Ph.D. student within the English Department at Vanderbilt University. His academic interests include American modernism, World War I literature, and contemporary work generated from the Global War on Terror. 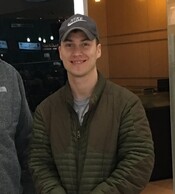