My research and teaching broadly concern the intersections of contemporary black poetry and media, aesthetics, and politics in the twentieth and twenty-first centuries. I’m particularly interested in the ways the oppressed understand their world and their situation in it, and especially the ways we imagine different possibilities of living free. My first book, Freedom Time: The Poetics and Politics of Black Experimental Writing (Johns Hopkins UP 2014), engages an exemplary set of formal techniques developed by black writers in the wake of desegregation and formal independence that engender new ways of understanding collectivity and collective possibilities in the present. That book, which offers extended analyses of works by N.H. Pritchard, NourbeSe Philip, Kamau Brathwaite, Claudia Rankine, Douglas Kearny, Suzan-Lori Parks, Harryette Mullen, and Nathaniel Mackey won the 2014 William Sanders Scarborough Prize from the Modern Language Association for an outstanding scholarly study of black American literature or culture. I recently published Soundworks: Race, Sound, and Poetry in Production (Duke UP, 2021). Looking at recorded collaborations between poets and musicians and between poetry and music (Langston Hughes and Charles Mingus, Amiri Baraka and the New York Art Quartet, Archie Shepp, Matana Roberts, Cecil Taylor, Jeanne Lee, and Jayne Cortez) Soundworks argues that poetry and music in the Black Arts era were mutually defining, and that attending to a richer sense of their interaction reveals the importance of self-sustaining, independent media to their radical aesthetics and politics. As with Freedom Time, this book conceives of aesthetic labor as also intellectual labor, and draws out the ways conceptions of the individual engender alternative understandings of community. My articles similarly engage intersections of aesthetics and politics in the work of Richard Wright, Claude McKay, Sun Ra, and others.

I am currently working on two books. One is a book of black lyric theory, concerned with the ways black writers have engaged practices to adapt, redact, cite, and transform from within the Western lyric tradition and its assumed speech situation. The other concerns black affective solidarities and dissonances as they register in aesthetic forms across the diaspora following the fall of Soviet Communism and South African Apartheid.

Freedom Time: The Poetics and Politics of Black Experimental Writing (Johns Hopkins UP, 2014)

Soundworks: Race, Sound, and Poetry in Production (Duke UP 2021)

“After the End of the World: Sun Ra and the Ends of History” Black Camera (Fall 2013)

“Woman is a Conjunction”: The Ends of Improvisation in Claude McKay's Banjo:A Story Without a Plot,” (Summer 2013) 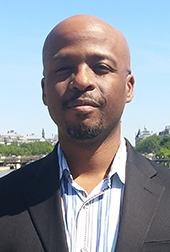