Posted by hoopek3 on Friday, April 1, 2022 in Uncategorized. 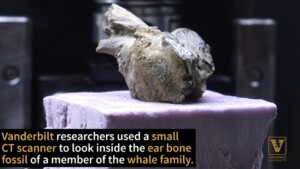 Vanderbilt University paleontologists, including EES Professor Simon Darroch, are looking into the evolutionary origins of the whistles and squeaks that dolphins and porpoises make — part of the rare echolocation ability that allows them to effectively navigate their dark environment. The team, one of the first in the world to examine the ability’s origins, used a small CT scanner to look inside a 30-million-year-old ear bone fossil from a specimen resembling Olympicetus avitus. This member of the toothed whale family, in a branch that died out before modern dolphins and porpoises appeared, lived in what is now the state of Washington. The CT scan revealed cochlear coiling with more turns than in animals with echolocation, indicating hearing more similar to the cloven-hooved, terrestrial mammals dolphins came from than the sleek sea creatures they are today. You can learn more about the project here!