Emily Greble is an historian of the Balkans and Eastern Europe. Her research interests include law and society, Islam in Europe, civil conflict, and local responses to socialism. Greble’s first book, Sarajevo, 1941-1945: Muslims, Christians, and Jews in Hitler's Europe (Cornell, 2011) examines the persistence of institutions and networks in the city of Sarajevo under Nazi occupation during the Second World War. It has been translated into Italian, Turkish, and Bosnian. Her second book, Muslims and the Making of Modern Europe (Oxford, 2021), traces the stories of several generations of local Muslim men, women, and children living in southeastern Europe from the 1880s to the 1940s, illuminating how Muslim histories are European histories and how Muslims helped shape modern states and societies, laws, and the European project. The book won the Rothschild Harriman Book Prize and was short-listed for the Laura Shannon Prize. It was also named a best book in History by the Financial Times for summer 2022 and is being translated into Bosnian and Arabic.

Greble has written several essays for academic and public audiences that problematize the ways that Balkan history is represented and understood in contemporary contexts, including

“Conflict in Post-War Yugoslavia: The Search for a Narrative,” and “Soccer and the Enduring Nonsense of Race” (with Habsburg historian Alison Frank Johnson). She is currently researching the revolutionary moment of the 1820s and 1830s in southeastern Europe, analyzing legal records that involve peasant women, escaped slaves, harems, religious pilgrims, rebels, activists, Muslims minorities, Roma (gypsies), Jewish prisoners, abandoned wives, and young children, in order to make sense of how marginalized people living in Europe’s borderland regions engaged with the law and how they used law to test the limits of state authority and to claim agency over their lives.

Greble’s work has been supported by numerous grants, including Fulbright, Fulbright-Hays, ACLS, the Mellon Foundation, IREX, NEH, and most recently a Guggenheim fellowship. She has held residential fellowships at the Remarque Institute (New York University), the Belfer Center for Science and International Affairs (Harvard University) and the Center for Advanced Holocaust Studies in Washington, D.C. In 2019-2020, she was the William S. Vaughn Fellow at the Robert Penn Warren Center for the Humanities at Vanderbilt. She serves on the Board of Directors for the Association of Women in Slavic Studies (ASWSS) and the editorial boards of Serbian Studies, Nationalities Papers, and the American Historical Review (AHR).

Professor Greble joined the Vanderbilt faculty in 2017 after teaching at the City College of New York and the CUNY Graduate Center. She teaches a wide range of courses in Russian and East European Studies, European History, and Law, History and Society.  She is currently chair of the History Department. 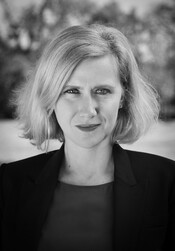