Maria is an archaeologist from Guatemala City. She gained her Licenciatura from the Universidad del Valle de Guatemala in 2008. Her thesis entitled "Archaeological Survey in the Valley of Guatemala", was inspired by the archaeological records of Edwin M. Shook and involved evaluating the effect of urban growth on archaeological sites in the department of Guatemala. In 2012, she directed a rescue excavation in the town of Sololá, in the Lake Atitlan region, where she recorded the city's principal cemetery, which was in use from the 16th to 18th centuries. Since then, she has continued working in the lake region, acting as a co-director on the Lake Atitlan Archaeological Project, and working as an advisor on issues of community, heritage, and archeology for the Institute of Anthropology and History (IDAEH), part of the Ministry of Culture of Guatemala. 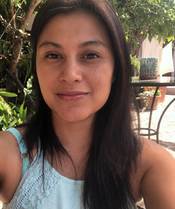