James is an archaeologist interested in technological and spatial analytic applications in archaeology with a focus on geophysical methods and spatial modeling. He seeks to utilize technology to develop an anthropological understanding of the impact of colonization on the distribution of political and economic power and the use of space by indigenous peoples. He holds an MA (2014) in Anthropology from the University of Arkansas (2014), a BA in Anthropology, and a BS in Mathematics from Georgia Southern University (2011). His masters thesis used Electrical Resistivity Tomography to explore sub-surface structures of the tallest prehistoric mounds in Arkansas. He has done fieldwork across the Southeastern United States, at the Gault site and throughout the Middle Missouri region of South Dakota, and in coastal Peru. In 2015, he worked as the Regenstein Collection Research Assistant for the Field Museum of Natural History, utilizing social network analysis and spatial modeling to understand the relation between linguistic variation and material culture in New Guinea. He is now interested in turning his attention to exploring the changes in landscape, society, and economics of Andean peoples as a result of Spanish colonialism. 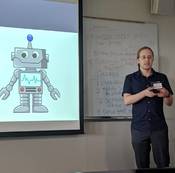