Dr. Bjork-James is a cultural anthropologist whose work focuses on strategies of grassroots autonomy and disruptive protest in Latin America. His book manuscript, The Sovereign Street: Making Revolution in Urban Bolivia (to be published in 2020), analyzes the takeover and use of urban space by grassroots social movements, particularly in the cities of Cochabamba, Sucre, and La Paz. Using both anthropological and historical methods, he explores how pivotal public events generate political legitimacy, contribute to major (sometimes revolutionary) transformations in the balance of power, and provide models for future political action. The ethnographic evidence collected about these events—of social life as experienced through the human body, the meanings attached to places, and social movement practices—explains how grassroots movements exert leverage upon the state through protest.

A second area of his scholarship concerns the dynamic interaction between protest tactics and state responses to protest in Bolivia. This includes protesters’ differing approaches to tactics, including movements that are explicitly nonviolent, violent, or neither; the causes, meaning, and consequences of death in political conflict; and the results of conflicts between unarmed protesters and armed members of state security forces. In addition to ethnographic study of these dynamics, he is compiling a database of deaths in Bolivian political conflict that covers events since 1982.

Finally, an emerging research project, Perspectives on Space and Territory in Socio-Environmental Conflicts, looks at the political, ethical, and legal tensions that surround resource extraction projects pursued by “post-neoliberal” governments in South America. Building on his past work in this area as both a researcher and a policy advocate, this project focuses on indigenous opposition to environmentally damaging projects on their traditional territories.

Overall, Dr. Bjork-James' research agenda examines how subordinate social groups, particularly the urban poor and indigenous peoples, organize their own spaces and assertively use public spaces. It pursues a spatially aware ethnographic approach, interested in the practical and symbolic significance of urban places and indigenous territories, as well as a careful examination of the practices of social movements in sustained conflicts. Some broader issues of interest in his research are evolving ideas of collective rights (including the right to strike, and the rights of peasants and indigenous peoples), strategic and tactical questions in collective mass action, and the role of urban space in reproducing and challenging racial and state power.

His teaching focuses on providing students with anthropological knowledge on globally relevant issues: indigeneity, environmental rights, the state, race, public space, cultural diversity, social inequality, and political change. Courses he regularly teaches include: Introduction to Cultural Anthropology, History and Culture of the Andes, Human Rights of Indigenous Peoples, History of Anthropological Theory II, Race as a Cultural and Legal Construct, Biology and Culture of Race, and Political Anthropology: States and Their Secrets. 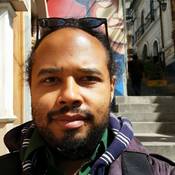 Thursdays 9:30-11:30am by appointment at https://calendly.com/cbjorkjames