Betsey A. Robinson (Harvard University, A.B., A.L.M.; University of Pennsylvania, Ph.D.) teaches courses in the art, architecture, and archaeology of the ancient Mediterranean world. Her primary interests include Greek and Roman architecture and art, ancient cities and sanctuaries, and landscapes--actual, imagined, and as represented in ancient art and literature. Since 1997 she has conducted research at the Corinth Excavations of the American School of Classical Studies at Athens, focusing on water supply, architecture, and works of art in context. Her book,Histories of Peirene: A Corinthian Fountain in Three Millennia (Princeton: ASCSA 2011), won the 2011 PROSE Prize for Archaeology and Anthropology. Her current project, "Divine Prospects: Mounts Helicon and Parnassus in Ancient Experience and Imagination," is a book-length manuscript on Hellenistic and Roman perceptions of, and engagement within, Greek landscapes and sanctuaries. Ongoing research considers Roman-era mosaics in Corinth, and the history of archaeological excavation in the 19th and early 20th centuries. Her career began with deep-sea exploration in the Mediterranean and work in paleontology and history of science; more recently, she has excavated ancient through modern contexts in Greece, Israel, and Italy. She currently serves on committees for the AIA, SBL, and ASCSA. 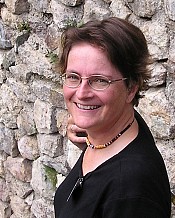