His theoretical interest is the study of space and how people imbue meaning in it through the appropriation of natural landscapes and the construction of cultural landscapes over time. Methodologically, He has a strong foundation in GIS, photogrammetry, and other spatial technologies, and sees the use of spatial analysis as central to pursuing many important questions about the transition from Inka to Spanish imperial rule.

He also published six articles and presented twelve papers about topics like spatial and iconographic analysis of rock art and new early architectural evidence in the coastal valleys near Lima, and on archaeological recording techniques using historical aerial photographs to generate 3D models for reconstruction of both landscape and archaeological sites that no longer exist. His latest article is a reinterpretation of the site of Nieve Nieve (middle Lurin river), a settlement identified before as Inka, but He proposes it was instead a "reducción" (an early colonial village built during the general resettlement of the 1570s), based on the analysis of its architectural design."

Here is the link to publications, papers, and thesis: 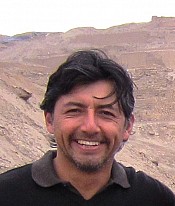