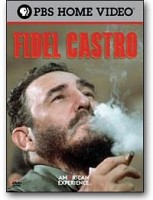 In the United States, Latin America, Europe, and in far corners of the globe, people from all walks of life either despise Fidel Castro as a ruthless dictator or lionize him as a champion of social justice. Nearly five decades after he assumed power, he remains a living legend, a touchstone for revolutionaries the world over, and a symbol of resistance to American dominance.

Fidel Castro is a new two-hour documentary from American Experience on the controversial, charismatic dictator who has confounded American presidents from Eisenhower to Bush, while surviving a CIA-backed invasion, countless assassination plots, an economic embargo -- even the collapse of his benefactor, the Soviet Union.

For the leader of a small Caribbean nation, Castro's impact on the latter half of the twentieth century has been inordinate. Castro sent his soldiers to the farthest reaches of the world and roused his people to accomplish heroic feats, in the name of justice and the promise of a brilliant future. But he also drove two million Cubans into exile, and silenced those who dared challenge his rule.

"To make this film," says filmmaker Adriana Bosch, "I had to reach deeper into my heart than I ever have before to attempt to answer the questions, Why Fidel Castro? And what really happened in Cuba under him?"

"Adriana Bosch brings to this documentary a rare combination of 20 years of filmmaking experience, personal interest, and academic training," says Mark Samels, executive producer of American Experience. "She is an accomplished documentarian; a native of Cuba, where she remained for a decade after the revolution; and her doctoral dissertation dealt with Cuban involvement in the Sandinista revolution. She is uniquely suited to make this film."

To craft this documentary, Bosch and her production team interviewed exiles and defectors, foreign policy experts, journalists, scholars, former members of Castro's government - even his daughter, Alina Fernández, and former brother-in-law, Rafael Díaz-Balart. The first-hand accounts of people who lived through the revolution -- either participating in it, battling against it, or fleeing from it -- are interwoven with the observations of Cuba experts, including Harvard University's Jorge Domínguez; Norberto Fuentes, a writer once close to Castro and now living in exile; Washington University's William Leogrande; and Marifeli Pérez-Stable, a professor at Florida International University. The producers were unable to gain entrance to Cuba despite repeated attempts.

The observations and experiences of these and other witnesses come to life against a backdrop of vivid and revealing images:

- Castro's mother, Lina, and Las Manacas, the Castro family's sprawling sugar plantation, shortly after it was seized by the revolutionary government

- And documents and photographs smuggled out of Cuban prisons, many seen here for the first time.

Unflinching in its approach, the documentary does not shy away from controversy, while acknowledging both Castro's accomplishments and his failures.

"Castro has managed to remain in power longer than almost any other leader in the last 100 or 200 years," comments Brian Latell, who spent 25 years studying him for the CIA. "It's a remarkable tenure -- a testament to his political skills, to his ability to play as a grand master at chess, always two, three moves ahead."

"There is a great chasm between the promise of the revolution and its results," notes Alcibíades Hidalgo, Raúl Castro's former chief of staff, who defected in the mid-1990s. "Cuba is, pure and simple, a dictatorship each day more devoid of the attributes that once made it attractive."

"Ultimately, the film is a cautionary tale," says Bosch. "It is the tragic story of a nation who saw a messiah in just a man."