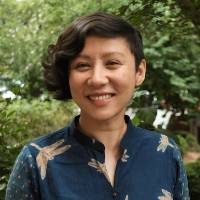 Mabel Denzin Gergan is a geographer by training, and her research focuses on postcolonial environmentalism, Tribal/Indigenous theorization, anti-colonial politics, and race and ethnicity in South Asia. So far, she has focused on the Indian Himalayan borderlands and the relationship between frontier territories and 'mainland' India, characterized on the one hand, by state-led development interventions in the region and on the other, through the movement of racialized bodies from the borderland to India's urban heartland. More recently, she has collaborated with scholars working on Indigenous politics in North America (British Columbia and the Navajo Nation), focusing on Indigenous youth activism, infrastructure politics, and decolonial futurity.

Born in Sikkim, India, she has lived and worked extensively in the Eastern (Sikkim) and Western (Uttarakhand and Ladakh) Himalayas. She holds her PhD from the Department of Geography at the University of North Carolina at Chapel Hill. Before joining Vanderbilt, she was an Assistant Professor in the Department of Geography at Florida State University.