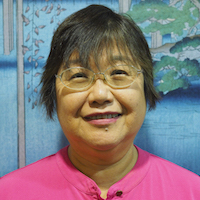 Dr. Shimizu holds a Ph.D.in Curriculum and Instruction with an emphasis on Japanese language pedagogy from the University of Denver. She has long experience teaching all levels of Japanese language and a range of other courses in Japanese culture, including kanji in Japanese orthography, Business Japanese, second language teaching methods and pedagogy, language & Japanese society, and Contemporary Japan. Her research interests are on attitudes toward teaching and learning vocabulary and kanji, second language acquisition, and social networking approach in Japanese and foreign language education.

on kanji learning and their relationship to novel kanji word learning