Houston A. Baker was born in Louisville Kentucky. He received his BA from Howard, and his MA and Ph.D. from UCLA. He is currently Distinguished University Professor (English and African American Diaspora Studies) at Vanderbilt. His awards and honors include: Guggenheim and National Endowment for the Humanities Fellowships and honorary degrees from several US colleges and universities. He served as President of the MLA and authored articles, books, and essays devoted to African American Literary Criticism and Theory. His book Betrayal: How Black Intellectuals Have Abandoned the Ideals of the Civil Rights Era received an American Book Award for 2009. 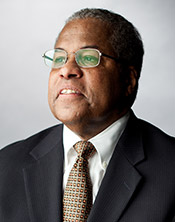