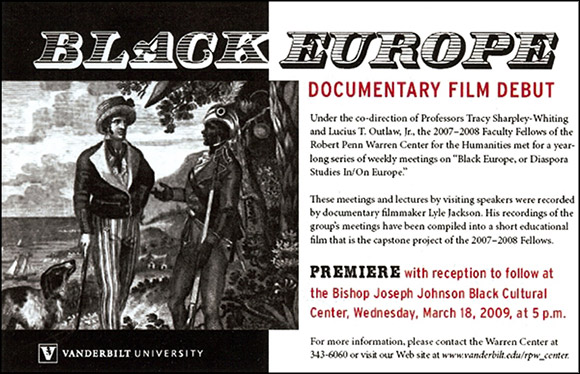 In the academic year 2007-2008, Professors Tracy D. Sharpley-Whiting and Lucius T. Outlaw, Jr co-directed a Robert Penn Warren Center for the Humanities Seminar on Black Europe, or Diaspora Studies in/on Europe. The seminar involved eight faculty members from diverse disciplinary backgrounds, including a visiting professor-in-residence and four invited guest scholars. The seminar culminated in an 11 minute documentary film. Black Europe is an emerging field of study in Diaspora Studies and represents a teaching and research strength of the Program in African American and Diaspora Studies at Vanderbilt University. As we continue to build on this particular area of excellence, we invite you to view the documentary film, which had its premiere on March 18, 2009. The documentary has been disseminated to high schools throughout the state of Tennessee.