A prominant fixture on Alumni Lawn, Neely Auditorium is home to Vanderbilt's Department of Theatre and its student producing organization, Vanderbilt University Theatre.

hall.  Aisles of pews lined the original space, providing seating for chapel service, courses in Western Civilization, and commencement ceremonies.  One of the original pews now lives in Neely's lobby, a reminder of the building's history.

But once inside, today's students find a modern performance space that serves a classroom during the day, a rehearsal space at night, and a performance venue once we open our shows.  Architects gutted the hall in 1976 and designed an open, black box theatre.  The flexibility of Neely Auditorium is its strength; as a large space with movable seating risers, Neely offers designers a range of options for stage arrangement.  We can stage an Elizabethan comedy in the traditional three-sided thrust arrangement of Shakespeare's Globe Theatre or stage it arena style with spectators on all sides.  We can surround the audience with spectacle or minimize scenery to the barest essentials, letting the actors define the space.  Each performance features a new arrangement, helping students explore the variables of theatrical space as they also learn to act, construct scenery, design lighting, manage rehearsals, and produce performance for a public audience. 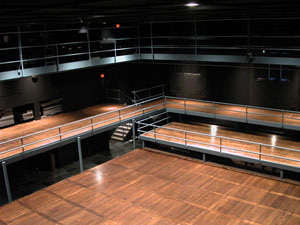 Set construction takes place in the shop adjacent to the stage; dressing rooms and the costume shop are located above on the second floor. Lighting technicians hang and focus instruments while standing on a military strength wire mesh grid that hangs overhead. State of the art computers and communication systems complement the strength and versatility of the space. The Department recently completed a redesign of Neely's lobby to add new lighting, display cases, and a more comfortable environment for our students and audience.