Musings on the Spaces of Violence

Posted by Teresa Tripp on Monday, April 4, 2022 in Uncategorized. 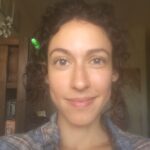 Taryn Marashi is the 2021-2022 Stella Vaughn Fellow from the Department of History. Specializing in medieval Islamic history, her research interests include social power and group identity, violence and space, crime and punishment, and urbanization under Abbasid rule.

The first time I read Henri Lefebvre’s book The Production of Space, I was a first year PhD student in history. I delighted in getting lost in his poetic reveries of the senses and representations of space; how sites transform and are transformed by lived experience. For Lefebvre, space is as much a production of human endeavor as it is a producer of human experience. What is more, different types of space offer different types of discursive materials and modes of social interaction. After reading his book, I was amazed by the many insights that a renewed appreciation of structure and form can provide to the study of urban conflict.

Why does all this matter? The spaces that we inhabit hold meaning and memory that can be repurposed, contested, or suppressed by violence.

Prior to reading Lefebvre, I had not given much thought to the role that certain spaces play in determining the course of historical violence. Space always seemed to be this arbitrary thing, a conceptual field bound and unbound by cultural, political, and social attitudes. And its inherent subjectivity always bothered me. Who gets to define space (and place!), and how does space dictate everyday aspects of life? Wracked by questions of agency, identity, power, and urbanism, I did what many students have done: I started to read books in critical theory, urban architecture, and anthropology.

Why does all this matter? The spaces that we inhabit hold meaning and memory that can be repurposed, contested, or suppressed by violence. Examining the role that the built urban environment played in the formation of historical violence can show us how social change occurred on the ground.

It was this fundamental relationship between urban space and violence that inspired the direction of my dissertation. My research evaluates the role that different types of urban space played in the formation of violence. The project comparatively analyzes six Islamic contexts (Baghdad, Basra, Kufa, Fustat, Khurasan, and Samarra) in the mid-ninth to mid-tenth century, a time plagued by regional rebellions, decentralized political authority, and immense social transformation.

One reason I concentrated on this period of Islamic history is because the social unrest that took place paved the way for many premodern Muslim dynastic authorities. Another reason is because this period has been largely dismissed as one of rampant disorder, despite serving as a time critical for social change. Taking a place-based approach, the dissertation argues that violence adapted to the built urban environment in distinct ways to produce and contest the construction of social power.

A question that continually surfaces in my research is whether certain forms of violence only occurred in certain spaces. Entangled in this inquiry is the changing relationship between historical actors and urban space. Space, after all, is not a static construct. How provocateurs of violence viewed and evaluated specific urban locales, ultimately deciding where to engage in aggression, is not always clear in historical narratives. Was this decision arbitrary or purposeful? Did certain urban sites draw aggression more so than others? These questions do not have easy answers.

But violence does not have to be performed against bodies to be considered violent. Particular urban sites, such as a public gate or a marketplace, hold different political and social meanings by nature of the function of the site and how that site accrues or loses signification because of violence. Thinking about the ways that space is made, imagined, experienced, and unmade by violence allows us to gain deeper insight into social change, and the boundaries that delineate communal belonging, identity, and power.

Taryn Marashi is a sixth year PhD candidate specializing in medieval Islamic history, with research interests in social power and group identity, violence and space, crime and punishment, and urbanization under Abbasid rule. Her dissertation, “Terrains of Tension, Mapping Violence in Medieval Islamic Society,” reveals how urban spaces shaped and were shaped by violence in the mid-ninth to mid-tenth century Middle East. She received her M.A. in Jewish, Islamic, and Near Eastern Languages and Culture from Washington University in St. Louis in 2015.