Posted by Teresa Tripp on Monday, March 14, 2022 in Uncategorized. 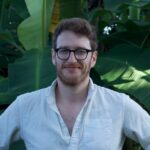 Emanuel Stults is a Doctoral Candidate in History at Vanderbilt University and co-organizer of the Political Ideology in Modern Life seminar at the Robert Penn Warren Center.

For the past six months a small group of graduate students have been meeting at the Robert Penn Warren Center to discuss readings on the topic of ideology in modern life. For years we have been seeing disturbing trends as our political sphere seems to be increasingly driven by ideas that are not just partisan but hateful, outlandish and paranoid. On account of this, we set about putting together an interdisciplinary seminar where, rather than read about or discuss contemporary politics, we would cast about for the work of historians, philosophers or social scientists who could shed some light on where these ideologies come from and how we should understand them.

As the name of the seminar implies, one of our main motivating questions has been about how to define “ideology.” This is hardly a closed issue—some of our members have asked repeatedly why we couldn’t define an ideology as any belief system. However, we have pushed forward with trying to find a more specific set of features that we associated with ideology to distinguish ideological views from views of a more general sort. Whatever its specifics, “ideology” is in some way a malady that befalls us when we engage in public discourse about politics.

What we have increasingly found is that ideology is a set of myths about history.

Our main path forward in this seminar has been to look closely at the content of ideology—what is the actual view of the world held by people who espouse these kinds of political beliefs? What we have increasingly found is that ideology is a set of myths about history. These myths—about ethnic groups, ancient wars or fallen empires, religions, plotting financiers in faraway cities, secret societies, and so on—generally fit together into a paranoid story about how all of recorded human history has been led off course by a conspiracy of malevolent interests.

In this regard we have a number of demonstrative cases that we have discussed already and will continue to do so—the examination of the French Terror, The National Socialists, or the Bolsheviks all serve to illuminate these issues for us. All of these examples showcase how the stakes of their respective revolutions weren’t merely to establish one regime in one country, but instead these revolutionary movements saw what they were doing as an apocalyptic battle to re-engineer the future and in the process save it from the corrupting forces of the world-historic conspiracy. In this manner, ideology is closely tied to public discourse. The conspiracy theories that characterize modern politics claim that public debate only appears to tell us about what our peers think—but that in truth history has been corrupted by a conspiracy that has brainwashed our peers and in so doing blocked the will of the true people.

One problem is that the ideologue views all disagreeing views as evidence of the reach of the propaganda of the conspiracy—which leads to what is known as Mannheim’s Paradox.

Perhaps the true people is the people of a nation, a race, a religion—or perhaps it is all of mankind once they are finally united in a way that overcomes the failures of the past. Because of this, the only way to free the true people from the conspiracy and save the future from fallen history is to overcome public debate through saving the people from the lies of the mysterious enemy.

One problem is that the ideologue views all disagreeing views as evidence of the reach of the propaganda of the conspiracy—which leads to what is known as Mannheim’s Paradox. How can you defend that what you are saying is not also just ideology? The working group cannot definitely claim to have transcended this problem yet.

The other problem is why these types of paranoid views are such a distinctive and enduring part of the experience of living in the modern world. Why is it that this kind of paranoid view is so common in a world of easy information, literacy, and open democratic discourse? This is a bigger issue, and it is the main problem confronting as we work on this project. Hopefully you find these questions interesting, and we will get to see you at the seminar sometime this Spring!

Emanuel Stults is a Doctoral Candidate in History at Vanderbilt University and co-organizer of the Political Ideology in Modern Life seminar at the Robert Penn Warren Center.