Posted by Teresa Tripp on Monday, February 21, 2022 in Uncategorized. 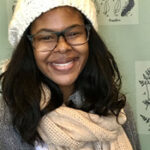 Courtney Brown is the 2021-2022 Mona C. Frederick Fellow from the Department of English. Her research focuses on the use of immortality as aesthetic practice in contemporary Black American art and literature.

I specialize in 20th- and 21st-century Black American literature and visual culture. Currently, my research focuses on the use of immortality as aesthetic practice in contemporary Black American art and literature. More specifically, I am interested in the social immortality of blackness, in the way that blackness has already demonstrated a long-standing resilience, a bent toward futurity, a way of making protest out of art, art out of protest, memory out of body, strategy out of memory, survival out of mourning, joy out of community.

Black people are making a future out of their own bodies and making their bodies into the future, making a body of blackness that has already lived forever, carrying the past in one hand, the future in the other, walking forward without needing to ask whether forward is a straight line. It’s not. Cyclicality, recurrence, and memory are just a few of the foundational structures upon which black folk have regularly built—artistically and politically—into the future.

The certain immortality of blackness that I am trying to get at here is neither anomaly nor happenstance, but is the product of work—backbreaking, bloody, sleepless work—as black folk continually work toward a world that is not intent on exterminating them, toward a future that not only allows for but nurtures, without obstacle or restraint, black liberation and joy.

While the longstanding philosophical conversation surrounding ‘immortality’ tends to speculate primarily on more individualistic quandaries (e.g. on the potential psychological effects of the body or soul wandering the earth, ageless and alone for countless eternities, wholly outside any social construct; particularly as with vampires or other unaging supernatural creatures), I am not so much interested in whether immortality is desirable or whether immortal life would eventually incur immortal boredom or wholesale disregard for life and relations.

Rather, I am interested in the concept of immortality as it relates to—in fact, is tethered to—the anchor of community. The certain immortality of blackness that I am trying to get at here is neither anomaly nor happenstance, but is the product of work—backbreaking, bloody, sleepless work—as black folk continually work toward a world that is not intent on exterminating them, toward a future that not only allows for but nurtures, without obstacle or restraint, black liberation and joy.

So, when I say that my current project both is survivalist and futurist, I do not mean to suggest that these two terms are in any way opposed; in fact, they are sisters, walking hand in hand. For me, survivalism implies endurance. It points toward a past that did not kill us, not completely, and toward a present that isn’t killing us either. At least, it hasn’t yet.

Survivalism is what drives a tenant like ‘by whatever means necessary,’ declaring that we are not passive agents in the maintenance of our own lives, that we are prepared to continually defend and uphold our right to equitable treatment and human dignity. Meanwhile, futurity implies imagination, architecture, hope. It points toward a world in which blackness need not be defined so centrally by endurance or resilience, by having weathered the centuries-long storm of white supremacy. In which black people need not come together so often in times of public mourning. In which black people may feel nourished rather than oppressed. Survival is evidence. Futurity is design. Both provide the necessary kindling for the immortal flame of blackness.

Born in California, raised (mostly) in Texas, and now living in Tennessee, Courtney Brown is a poet and scholar, currently working on her PhD in English at Vanderbilt University, where she recently received her MFA in Poetry. Her scholarship focuses broadly on notions of race, racial authenticity and ambiguity, black interiority, shared and/or inherited experiences of blackness, and the way that these experiences are portrayed in literature and visual media, particularly through such genres as horror and fantasy. She is most interested in the way contemporary black artists utilize surrealist techniques in order to convey very real joys and traumas.