Posted by Teresa Tripp on Monday, February 7, 2022 in Uncategorized. 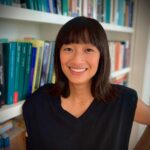 What does the phrase “Environments” mean to you?

In my research, I explore how concepts of life and organic nature played a central role in nineteenth-century German philosophy, especially in their theories of mind, agency, and community. Focusing on the work of G.W.F. Hegel and his contemporaries, I investigate how romantic philosophies of nature informed the more well-known philosophical contributions of this period, including rationalism and historicism. The theme of “environments” is central for my ongoing research: since living beings and species only survive and thrive in relation to their environments, there is an emergent ecological framework in German idealism and romanticism that remains under-explored, one that is important for understanding subsequent philosophical developments in the nineteenth-century.

My specific interest in the concept of life was initially sparked by my reading of Hegel’s (highly obscure!) Science of Logic (1812–1816), in which he surprisingly dedicates chapters to the topics of teleology and life leading up to the conclusion of the text.

I’m particularly interested in how the environmental, ecological framework of German idealism and romanticism influenced Marx’s philosophical development and his mature critique of political economy. During my fellowship, I will focus especially on how Marx’s concept of “species-being” (Gattungswesen) can be renewed in light of the theme of environments and argue that labor for Marx is a fundamentally ecological concept.

What initially sparked your interest in your research?

Since my undergraduate and graduate studies, I have had broad interests in the area known as “continental” philosophy. My current research interests were sparked by the goal of understanding the influence of German idealism on the tradition of critical social theory, especially as developed by Marx and the Frankfurt School in the twentieth century. My specific interest in the concept of life was initially sparked by my reading of Hegel’s (highly obscure!) Science of Logic (1812–1816), in which he surprisingly dedicates chapters to the topics of teleology and life leading up to the conclusion of the text. This led me to investigate the role of life and organic nature more broadly in Hegel and German idealist philosophy, resulting in my first book, Hegel’s Concept of Life: Self-Consciousness, Freedom, Logic (OUP, 2020).

What was your first job and what did you learn from it?

I grew up in Toronto, Canada, and my first job in high school was at much-loved chain restaurant named “Swiss Chalet” that served rotisserie chicken. I worked at the take-out counter and burned myself constantly on a secret concoction known as “Chalet Sauce.” Working with servers, cooks, and bussers was an eye-opening experience, and everyone should probably work in the service industry at some point in their lives — it is a first-hand lesson in the division of labor in society and human psychology all at once.

Karen Ng specializes in nineteenth-century European philosophy (esp. Hegel and German Idealism) and Frankfurt School Critical Theory. Her book, Hegel’s Concept of Life: Self-Consciousness, Freedom, Logic, is published with Oxford University Press (2020). In addition to her research in post-Kantian philosophy, she is also interested in the ongoing influence of Hegel and Marx for critical social theory, particularly as their legacies help us understand the relation between human beings and nature, possibilities and failures of mutual recognition, and conceptions of progress and critique.