Alma Paz-Sanmiguel is an administrative specialist for CLACX at Vanderbilt University.

In the sixteenth century, Spaniards brought the Roman Catholic celebrations of life, death, and regeneration to Latin America, where they fused with indigenous rituals that honored the dead. This merging of cultural practices led to the traditional holiday of el Día de los Muertos (Day of the Dead), which is now celebrated on the first two days of November. This annual holiday celebrates the lives of the deceased on the days of the year when their spirits are believed to return to our living world.

This holiday has a rich and ancient history, dating back over 2000 years – it was part of religious practices among different native peoples included Maya, Inca, and the Aztecs.

This informational booklet created by Vanderbilt’s Center for Latin American, Caribbean, and Latinx Studies (CLACX) describes how the holiday is celebrated in different countries in Latin America. I am from Mexico, so I will share with you the Mexican traditions: 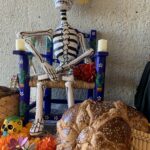 In the days preceding the holiday, it is customary to build a shrine to honor one’s deceased relatives. These shrines or altars, referred to in Spanish as “ofrendas,” are bright and colorful. They are adorned in orange and purple, the holiday’s traditional colors, and decorated with flowers, including marigolds, and decorated paper crafts, such as the traditional “papel picado.” These items sit alongside sugar skulls, candles, and the traditional “pan de muerto” (a special kind of bread).

Her role was to watch over the bones of the dead, and her presence was

front-and-center during any recognition of those who had passed on. The adoption of La Catrina as the emblem of Day of the Dead today takes many forms – from the sugar skulls in every shop window to the makeup and dress exhibited by festival-goers everywhere, male and female, Catrin and Catrina. In many ways, she ties together the times and their interpretation of death: her elegant dress suggests celebration, her smile – however inescapable – reminds us that there is perhaps comfort in an acceptance of mortality and that the dead should be commemorated, not feared.

It is customary to visit cemeteries

In preparation for Day of the Dead, families will clean and wash the graves of their departed and decorate them with candles and flowers such as marigolds. According to Mexican folklore, it is believed that the smell of marigolds attracts the spirits.

Every year for the past 10 years, Vanderbilt CLACX participates by creating an altar for the Día de Muertos Festival at Cheekwood Estate and Gardens; I contribute to the design and installation. I also create my own altar at home which I dedicate to my Grandmother Mina, my father Silviano, my wonderful in-laws Sergio and Rosy, and my dog Gordo. I display photos, personal items, and their favorite foods.

Learn more and reserve tickets for the Día de los Muertos festival at Cheekwood Estate and Gardens, or explore the CLACX Educator Toolkit on Day of the Dead.

Alma Paz-Sanmiguel joined CLACX in July 2011 as administrative assistant II. Alma has a background in graphic arts and small business management. Alma’s duties include providing administrative support for CLACX faculty, staff, and students; coordinating logistics of visiting speakers; organizing conferences; and strengthening the Center’s relationships, both on and off campus, through events such as Global Villages at Celebrate Nashville Cultural Festival and the Latin American Images Photo Competition. Alma was born in Guadalajara, Mexico. You can follow CLACX on Instagram @vanderbilt_clacx, Twitter @VanderbiltCLACX, and Facebook @VanderbiltCLACX.