All Lectures are free and open to the public. Each is sponsored by the Vanderbilt Philosophy Department with the generous support of the Berry Fund.

The Vanderbilt University Philosophy Department, thanks to the generous support by the Berry Fund, is pleased to invite you to the annual  Berry Lecture in Public Philosophy.  Our speaker, this year, will be  Prof. Eddie S. Glaude, Jr.  (Princeton), who will deliver a lecture entitled "James Baldwin and Black Democratic Perfectionism".
The event will take place on  Thursday, March 18th, at 7 pm CST.
This online event is free and open to the public. Advanced registration is required and available through the link below.
For questions, please contact matthew.congdon@vanderbilt.edu.
REGISTER HERE: https://vanderbilt.zoom.us/webinar/register/WN_j-A5-tz_R9Cht1sNHiMR7Q. 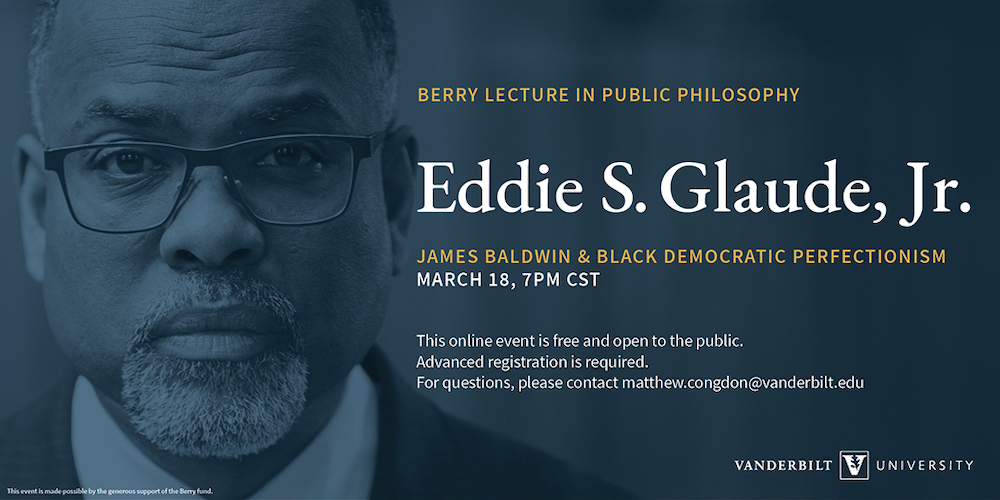 Michael Lynch (Connecticut), "Knowledge in the Age of Big Data"

Lenn Goodman, “Two Ways to do Metaphysics without Really Trying: Aristotle and Avicenna on Being at Large”

David Wood, “‘What does not kill me makes me stronger’: Why we Still Read Kierkegaard and Nietzsche”

José Medina, “Love and Other Demons: Wittgenstein and Skepticism”

Larry May, “Can War be Justified?”

War and other forms of armed conflict involve the intentional killing of many people, combatants as well as civilians.  For several millennia, philosophers have debated whether something that in everyday life would normally be instantly recognized as unjustified could nonetheless be justified in war. The classic arguments talk about how war is sometimes necessary to prevent even greater tragedies than the killing that war inevitably involves. And the killing of soldiers in particular has been justified by claims that they have forfeited their rights by joining the military.  But many have not been persuaded, only some of whom are pacifists.

W. James Booth, “Can the Dead Be Harmed?”

Can the dead be harmed? One on account, to be dead is to cease to have any existence whatsoever, and therefore to have no interests, feelings or hopes that could be thwarted or harmed by others. Counter- arguments advance claims that the dead or their interests do persist, and so can be wronged. These debates are of importance across a range of concerns. Do we actually owe something to our beloved family dead, for example devotion, remembrance or compliance with their will as it was when they were alive? Is doing justice to the deceased victims of past injustice something we owe them, such that if we failed in this we would further injure them? During this presentation, I will sketch and weigh some responses to these questions, and underline their importance for our everyday lives.