Sabeen Ahmed is currently Provost’s Graduate Fellow in the Philosophy Department at Vanderbilt University. Her research engages with issues in contemporary social and political philosophy, medieval Islamicate political philosophy, political theology, and continental philosophy, all of which are grounded in a broader concern with state practices of racialization. Her dissertation examines the discursive construction of the “refugee” from a Foucauldian approach, focusing in particular on the normative implications of defining the Convention refugee as a “persecuted” subject. Her work has been published in Theory & Event, Philosophy Today, and Puncta: Journal of Critical Phenomenology. She has also co-edited a volume with Kelly Oliver and Lisa Madura titled Refugees Now: Rethinking Borders, Hospitality, and Citizenship, which was published with Rowman & Littlefield in 2019. 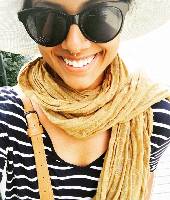 B.A in Spanish and Philosophy with High Distinction, University of Virginia, 2013