Eric Ritter’s current work focuses on the intersection of social and political philosophy, aesthetics, critical race theory, and ordinary language philosophy. His long-term goal is to bridge critical perspectives on criminal justice with philosophy. Some of the philosophers he is most interested in are Aristotle, Kant, Wittgenstein, Dewey, and Cavell.

In June of 2019, Eric defended his dissertation on Cavell’s analysis of skepticism, arguing that the threat of skepticism is not a doctrine but a space of reasoning which evades or rejects historical and cultural conditions of inquiry. In short, his dissertation argued that skepticism was both more widespread and more toxic than most philosophers tend to conceive of it.

As Postdoctoral Fellow at Vanderbilt University, he has been organizing and inventorying Cavell’s posthumous papers. In the summer of 2020, Eric will be a fellow at the Cinepoetics Center at the Freie Universität in Berlin, Germany. 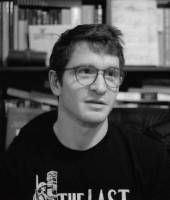