On the Ropes: Boxing and Black Sexuality in American Art 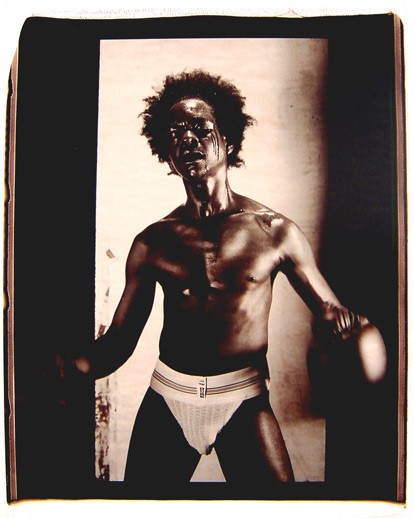 Jordana Moore Saggese, associate professor of American art, University of Illinois at Urbana-Champaign, will explore the intersections of aesthetics and athletics in American visual culture—both thematically and formally---at the Norman L. and Roselea J. Goldberg Lecture on Thursday, October 17, at 4:10 pm in Cohen Hall 203. Her talk is entitled "On the Ropes: Boxing and Black Sexuality in American Art," with a reception to follow in the Cohen atrium.

Saggese will analyze twentieth-century representations of black male boxers across visual culture. More specifically, how might boxing and its representation function as a site for the performance of ideas about identity and difference?

Her work centers on modern and contemporary American visual culture with an emphasis on expressions and theorizations of blackness.  Saggese notes that “without an understanding of how black masculinity is constructed in the visual realm, we fail to grasp how legacies of oppression and stereotypes continue to resonate across generational, geographical, and political lines.”

In her presentation Saggese will explore two questions: “First, how do images of black athletes help to circulate racial and gendered stereotypes of the black male body, and simultaneously shore up the ideology of whiteness? Second, how have African-American artists deployed images of athletes in order to interrogate the social positions of black men more broadly?”

Saggese, editor-in-chief for the College Art Association’s Art Journal, has written extensively on Jean-Michel Basquiat and his painting practice. Her first book, Reading Basquiat: Exploring Ambivalence in American Art, (University of California Press, 2014) received the PEN Center USA Award for Exceptional First Book in 2015. A second book, The Basquiat Reader: A Critical Anthology (University of California Press, forthcoming), will be part of the “Documents of Contemporary Art” series. Her current book project, Game On: The Black Male Boxer in America, highlights themes of blackness, masculinity, and sport.

Sponsored by the Department of History of Art, the Goldberg Lecture is free and open to the public. Parking is available in all non-reserved spaces in Lot 95 near Cohen Hall, off 21st Avenue South on the Peabody campus and across from Medical Center East. For more information, call the department at 615.322.2831.

Department of History of Art and Architecture Graduation Celebration

Past Lecture: Michael Yonan: Stories in Porcelain: Matter, Narrative, and the Figural Ideal

Past Lecture: Jordana Moore Saggese: On the Ropes: Boxing and Black Sexuality in American Art