I was so fortunate to travel to Berlin, Germany over fall break through the 2019 Downing Grant. I was able to conduct research at the Plötzensee Prison Memorial for the History of Art Seminar, HART 3766W: Post-1871 Berlin Monuments. My research thesis addresses how Plötzensee’s current memorialization has impacted the remembrance of its collective history as a prison. My paper will tackle how themes of “remembrance” can be influenced by distinct events within a greater history. 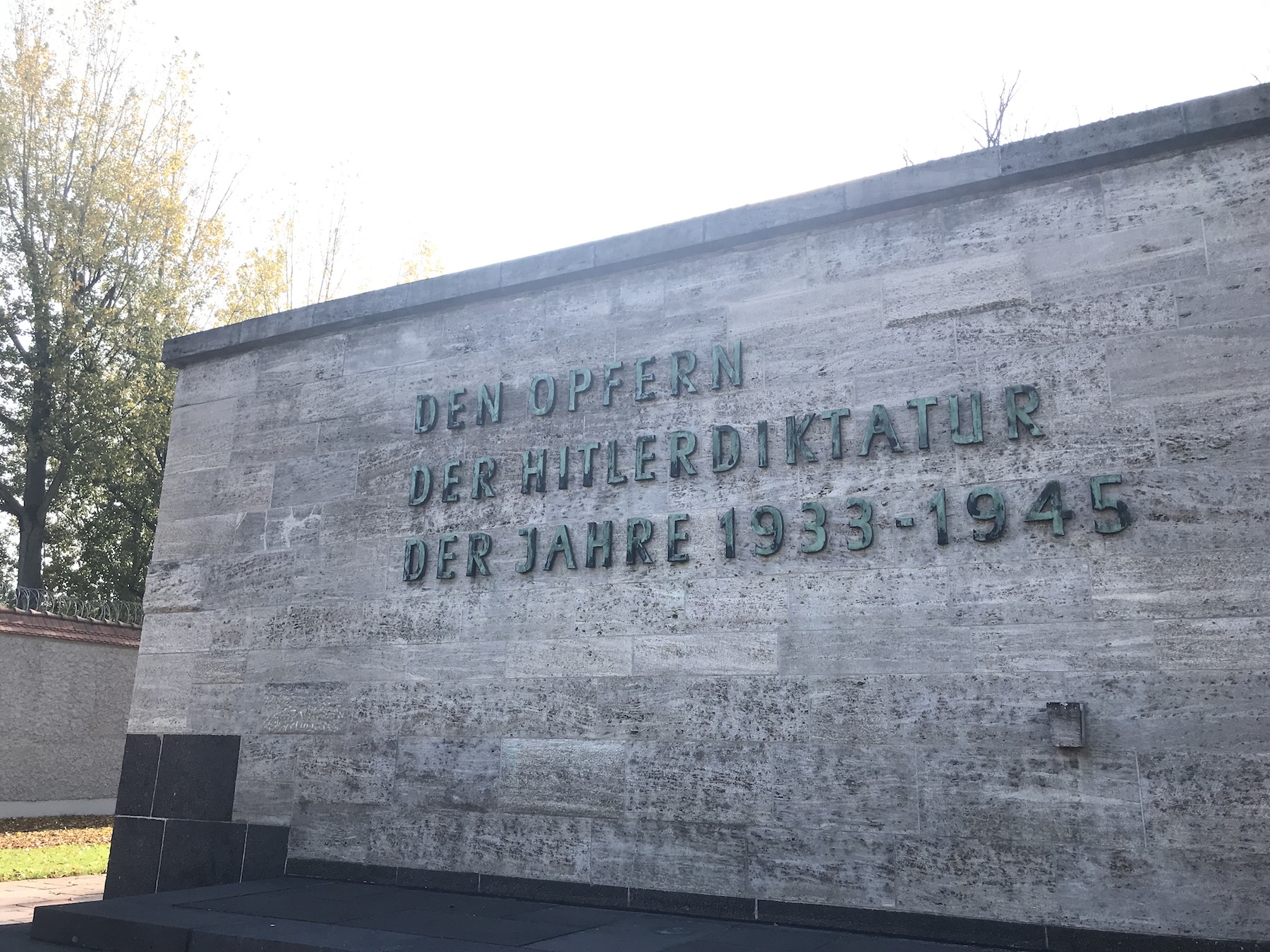 Upon arriving in Berlin, I began my first day of research at the Plötzensee Memorial Center, located in the Charlottenburg-Nord region. The site is  removed from any bustling city activity, and thus presents a silent and still atmosphere that is fitting for its purpose. The memorial was built in 1951 to be a site of remembrance and commemoration to the victims of the National Socialist dictatorship. More specifically, Plötzensee Prison was utilized by the Nazi regime to carry out executions through their corrupt justice system. At Plötzensee, more than 2,800 prisoners were executed between 1933 and 1945.

Upon entering the gates of the site, I was confronted by a massive commemorative wall made of volcanic tuff blocks. The wall creates a physical  boundary between the visitor and the execution shed, where the memorialization is focused. Walking past the wall, I went inside the old execution room, where a collection of flowers were gathered. The silence of the space was emotionally charged. After lingering for a moment, I went into the next room. Here an exhibition addresses the executions at Plötzensee Prison, the discriminatory justice system that contributed to the loss of lives at 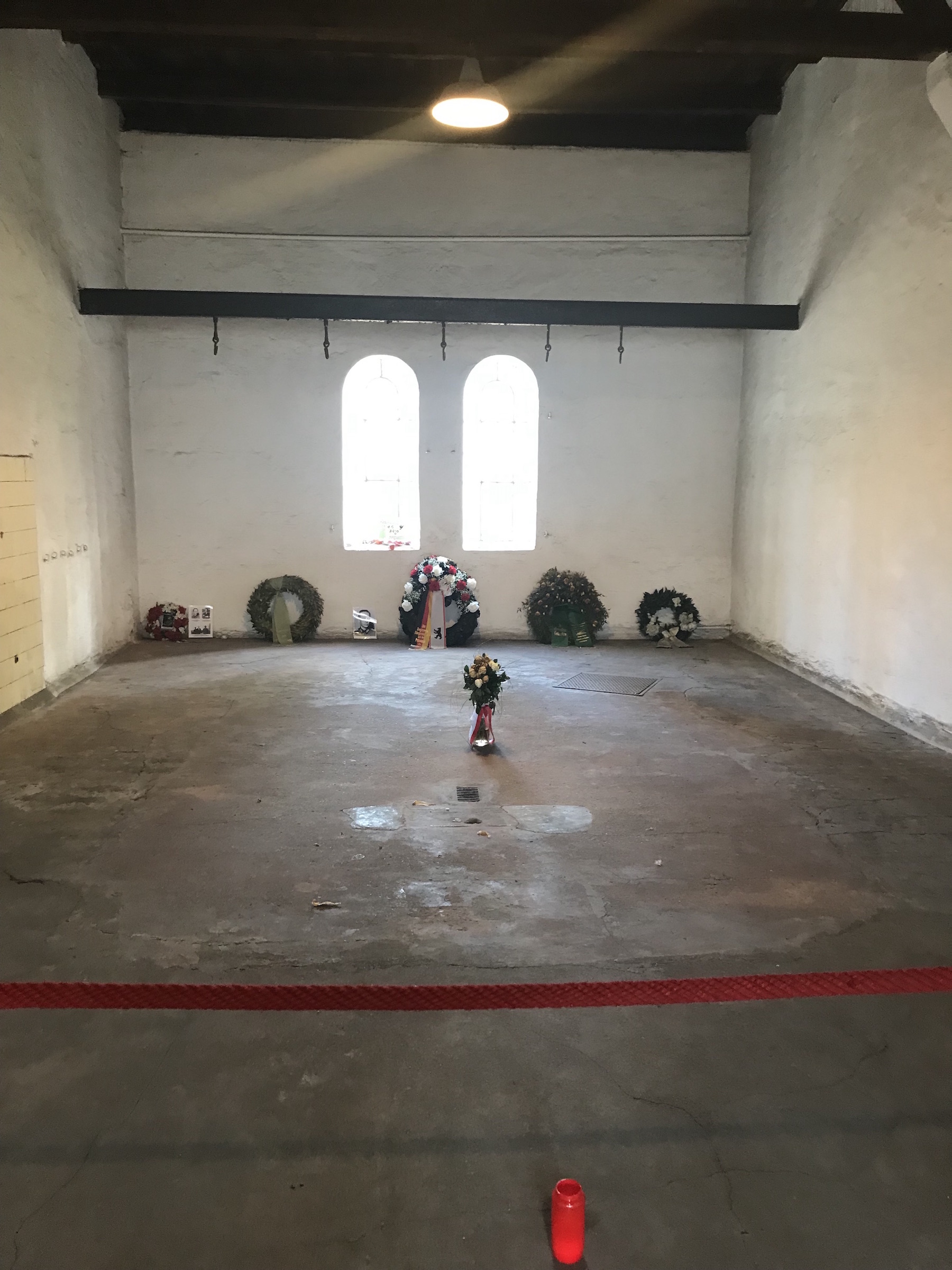 the site, the history of the site’s commemoration, the “bloody nights” that occurred at Plötzensee, and the resistance groups that were targets of the judicial system (the Czech resistance fighters, the Red Orchestra, etc.). The exhibition is complemented by images of individuals involved in such resistance groups, as well as detailed biographies on their efforts to fight for the rights of their fellow citizens.

The site overall gave me a greater sense of the individual people and groups involved in the history of Plötzensee Prison from 1933 to 1945. I was also able to better understand the unjust system that contributed to the terrors that occurred not only at Plötzensee, but across the city of Berlin and within its varied buildings, landmarks, and sites.

Throughout the rest of my time in Berlin, I visited additional sites such as the Topography of Terror, East Side Gallery, Holocaust Memorial, and Checkpoint Charlie. By walking across different areas of old East and West Berlin, I left my visit with a sense of how Berlin makes efforts to remember the history of the National Socialist dictatorship, and the focus that they place on remembering both individuals and the system of abusive power that allowed such events to ensue.

I deeply appreciate the Downing family support of my travel and research, which has given a new dimension to the knowledge I have built in this course. I also appreciate the support of the History of Art Department, and my professor Vivien Fryd who has mentored me and offered guidance in both my research paper and travel to Berlin.