Miguel Chavez is a sixth year graduate student, receiving both his B.A. and M.A. from the University of North Texas. His M.A. thesis, The Shifting Borders of Egypt (2015), details the classical, biblical, and orientalist motifs inherent in British cartographical representations of Egypt during the nineteenth century. Miguel is interested in the creation of cartographic, geographic, and ethnographic knowledge alongside with the history of imperialism.

For his doctoral work, Miguel plans to focus on the exploratory history of the Nile Valley in the nineteenth century, examining the creation of scientific knowledge on the eve of the Scramble for Africa. By situating his project on how Khartoum functioned as a node within the network of knowledge creation and as a node for imperialism, he hopes to further the dialogue between the history of science, imperial histories, and spatial history. 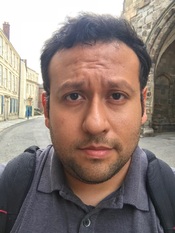